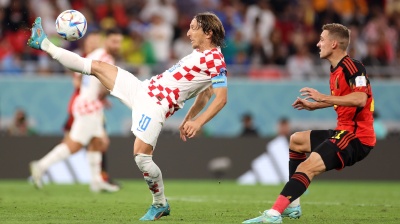 Croatia progressed to the knockout stage of the 2022 World Cup after holding Belgium to a draw. / FIFA
By bne IntelliNews December 1, 2022

Croatia has made it out of the group stage of the 2022 World Cup in Qatar, keeping hopes of a repeat of its spectacular performance in the last championship four years ago very much alive.

The goalless draw against Belgium — ranked the second team in the world by FIFA — on December 1 came at a time when Croatia, like the rest of Emerging Europe, is feeling the pain from the war in Ukraine, sanctions and rampant inflation.

The country would benefit from a consumer spending boom like the one it experienced in the 2018 tournament, where the national team dramatically exceeded expectations, making it all the way to the final.

As their team advanced in 2018, Croatians splashed out, spending hundreds of millions of kuna more than during a typical summer month. In total, spending during the championship, which lasted from June 14 to July 15, 2018, increased by an estimated HRK2bn (€270mn) on the year.

Spending related to the event boosted the profits of producers and sellers of beer, snacks, souvenirs and TV sets, as well as travel agents as fans booked trips to matches in Russia, and brought more money to the state budget. Beer consumption in the country typically increased from 7,000 to 12,000 hectolitres on the days the Croatian team played its matches.

Overall, retail sales in Croatia rose on average between 11% and 15% on the days before a World Cup match and on the days of the matches, the Croatian Chamber of Commerce (HGK) said in 2018.

That wasn’t the end of it. Croatia’s run of success boosted its international profile, with people all around the world googling the small Balkan country. That in turn boosted tourism, one of the country’s key economic sectors and an important contributor to GDP. Later that year, Croatia’s tourism board HTZ reported that the number of tourists visiting the country had increased 6% to 19mn in the first 10 months of the year.

This year, Croatia, along with Slovenia and Montenegro, is one of three small Southeast European countries that are set to outperform the rest of the Central, Southeast and Eastern Europe region in terms of GDP growth.

Croatia’s strong performance for much of the year was down to a combination of its relative resilience to the energy crisis, thanks to a large extent to its construction of the offshore floating liquefied natural gas (FLNG) terminal on the island of Krk, and partly to the continued post-COVID rebound of its tourism sector.

Moving into next year, however, Croatia is already experiencing a sharp slowdown and growth is anticipated to be just 1.0% in 2023, down from 6.0% in 2022, according to the latest set of forecasts from the European Commission, which are broadly in line with those from other international financial institutions (IFIs).

That could be eased by a spike in consumer spending over the month of the current championship, especially if the Croatian team manages to win matches in the knockout stage.

Croatia ended the group stage in second place after Morocco in Group F, having defeated Canada and drawn with both Belgium and Morocco. Its next match will be against the winner of group E, most likely Spain.

Among the other countries from the Central and Eastern Europe competing in Qatar, Poland also advanced to the knockout stage, for the first time since 1986, while Serbia will play its final group match on December 2.

Croatia’s first matches in this year’s World Cup have been marked by controversy.

Canada manager John Herdman outraged the team and its fans by commenting before the two teams’ match: “I told them [the Canadian team] they belong here. And we’re going to go and eff Croatia.”

After Croatia beat Canada 4:1 on November 27, Andrej Kramaric, who scored two of the goals, commented: “I’d like to thank the Canada manager for motivation. In the end, Croatia showed who effed who.”

Back home in Croatia, Herdman became a hate figure; he was even pictured in a mockup on the cover of the 24 Sata tabloid naked with Canadian flags over his mouth and crotch. The headline read: “You have the mouth, but do you have the b***s as well?”

That was the second time Balkan tensions erupted in this year’s World Cup. Serbia also faces disciplinary action over a political banner hung in the national football team’s locker ahead of Serbia’s World Cup match with Brazil. The map showed a map of Serbia that included Kosovo, a former province that declared independence in 2008, and bore the caption “No Surrender”.

There is further controversy off the pitch, where former Miss Croatia Ivana Knoll has turned up in a variety of revealing outfits — including a low cut dress in the colours of the Croatian flag — to watch matches in conservative Qatar. In other pictures posted on Instagram she poses in skimpy bathing costumes and bikinis, also with the distinctive red and white check pattern.