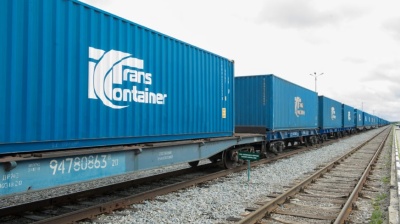 Freight containers in Belarus / https://oevz.com
By bne IntelliNews May 19, 2022

During a meeting with Russia’s Prime Minister Mikhail Mishustin last Friday, 13 May, Belarusian Prime Minister Roman Golovchenko is reported to have said that the western sanctions have blocked $16bn-$18bn worth of Belarus’ annual exports this year. According to Golovchenko, the sanctions had blocked “almost all of Belarus’ exports to the countries of the European Union and North America.”

It’s previously been known that 70% of Belarus’ exports to the EU have been blocked by the sanctions. That the blocked trade amounted to $16-$18bn, however, had not been quantified before.

If Belarus’ previous talk of successfully reorientating its exports from the West towards “friendly” markets like Russia and China appeared unlikely before, this appears even more unlikely now.

Decreased demand in Russia due to lower economic activity coupled with the effects of its import substitution programme does not bode well for Belarusian (mostly) state-owned companies trying to sell goods worth billions of US dollars. Moreover, penetrating new foreign markets takes time and increasing market shares is not done overnight, especially not in a highly competitive economy like China’s.

In 2021, Belarus’ GDP growth surprised many analysts and rating houses as it reached 2.3% despite harsh sanctions piling up throughout the year. Last year, Belarus’ exports totalled approximately $39.9bn and imports roughly $41.8bn, constituting a trade deficit of about $1.9bn.

The latest numbers from Golovchenko therefore mean that current sanctions are blocking between 40-45% if Belarus’ total exports: a heavy blow to the country’s foreign trade dependent economy.

Belarus’ has a high trade to GDP ratio that reaches above 100%, and the country more than often runs trade deficits due to its import dependent economy and relatively low variation in export goods.

Since the country’s inhabitants are not set on abruptly changing their consumption patterns, the country will keep importing while the demand drops for its own currency due to decreased exports. This is bound to decrease the value of the Belarusian ruble and accelerate the country’s already rapidly rising inflation rates.

According to Belarus’ Ambassador to Brazil, there are talks of resuming Belarusian potash exports by Brazilian importers purchasing directly from Belarusian potash producers. Nothing substantial appears to have come from these talks other than both sides establishing that Brazil wants to acquire potash fertilisers at a “reasonable price”.

Due to the currently sky-high price for potash and therefore high profit margins, Belarus can drastically lower its prices and still maintain a good profit margin. Belarus appears to be utilising this, as the price for its potash fertilisers has reportedly so far this year been 60% lower than potash from Russia and Canada.

However, lowering its prices or striking at least one potash trade deal won’t save the situation. Even if Belarus lowered its prices to get its goods sold while reducing profit margins or if it managed to dodge sanctions somehow, the losses this year will still be considerable.

Let’s assume that most of the currently blocked exports reaches their market destinations, and perhaps only $5bn is lost by the end of 2022 while imports remain the same as last year. In this scenario Belarus would still have a trade deficit of almost $7bn, the largest deficit since its economic crisis in 2010.

Regardless of whether Belarus solves the problem of its exports not reaching their market destinations for this year or not, its trade partners (like Brazil) are already beginning to look for alternative supplies.

Since sanctions began mounting over Belarus after the regime’s brutal crackdown on the country’s opposition in 2020, the official narrative has been that sanctions are not severely affecting the country. Last year’s high global commodity prices helped Belarus to sustain this narrative by driving high exports and positive growth numbers.

According to Belarus’ Economy Minister Aleksandr Chervyakov, “People should not feel the effect of the sanctions. It is a priority task for the government.” However, as Golovchenko said in an interview on Saturday, the government knows “that very serious and intensive work needs to be done in order to prevent a deterioration of the situation.”

As Bne IntelliNews reported last week, Belarus' Economy Ministry has begun working on reorienting logistic chains and market destinations towards Russia and other “friendly countries”. Several legal changes are also being made to ensure the fiscal stability of companies in the state and private sectors.

To summarise Chervyakov’s goal, he wants to “mobilise all the available resources in order to endure and move forward.”

The Economy Ministry's latest move in this mobilisation is the creation of the newly created Servicisation and Re-engineering Agency, which has been tasked with conducting an “optimisation” of the country’s administrative procedures. Its aim is to produce an overall picture of the bottlenecks which exist in the interaction between the state administration and the private sector.

However, the first results from this agency are not expected until August, and only by the end of the year is it supposed to have created tools for the digitisation of administrative procedures.

The Belarusian regime is stuck in its path dependency of applying administrative and regulatory changes to solve problems which are in fact of a different nature.

While an easing up of administrative procedures can increase SME entrepreneurship in the country, they have little to do with Belarusian exports reaching their target destinations. In previous crises, these types of increased administrative controls have exacerbated already growing economic problems – something they can and probably will do again.

How credible is Putin and Lukashenko's plan to make Belarus nuclear-capable?