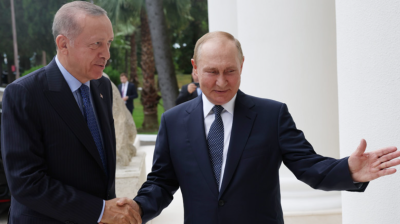 How far can Turkey go in helping Russia counter Ukraine war sanctions before it gets hit by sanctions itself? That was one of the key questions left hanging in the air following the secretive August 6 meeting between Russian leader Vladimir Putin and Turkish counterpart Recep Tayyip Erdogan in the Russian Black Sea resort of Sochi.

There’s no doubt that Erdogan, anxious to obtain every advantage he can for economically imperilled Turkey ahead of elections that must be held within the next 11 months, is testing the limits. bne IntelliNews reported on August 4 how Turkish press reports describe Turkey’s port warehouses as packed full with goods bound for Russia. The four-hour Sochi talks, which were not followed by a press conference with the presidents, generated more questions than answers.

Commitments agreed upon were largely described in vague terms. Putin and Erdogan, according to a joint statement put out after their meeting, agreed to boost cooperation in the transport, agriculture, finance and construction industries. Offering a little more detail on some financial cooperation, Russian Deputy Prime Minister Alexander Novak told reporters after the talks that Russia and Turkey would move to partial payment in rubles for Russian gas deliveries as the countries continued with a gradual shift toward settlement in national currencies. He didn’t, however, indicate how much of what he stated was 26bn cubic metres of gas sent yearly to Turkey would be paid for in rubles.

Another specific deal should see Ankara making it possible in the near future for Russian Mir payment cards to be used in Turkey. Bloomberg reported that five Turkish banks were set to adopt the Russian payment system.

Prior to the meeting, Erdogan said in comments broadcast on Turkish television: "Our meeting will be completed and open a very different page in Turkey-Russia relations."

There are observers who speculate that the meeting dealt with plenty more than was publicly discussed by Russian officials such as Novak after it concluded.

A Ukrainian government report outlined by the Washington Post said prior to the talks that Putin would seek Russian stakes in Turkish oil refineries, terminals and reservoirs in a bid to disguise the origin of Russian oil exports in advance of a planned EU oil embargo on Moscow. The newspaper also said that Russia could pursue correspondent accounts for large Russian banks looking to circumvent sanctions.

The Russian government made no comment on the report and there was no outward sign that Turkey would consider such proposals.

Other claims that the two leaders planned to discuss more than their economic cooperation were sparked by Russian journalists noting that Ramzan Kadyrov, the Chechen leader who has sent forces under his command to the conflicts in both Syria and Ukraine, was in attendance in Sochi.

The fact that Turkey, a Nato member, has not sanctioned Russia over events in Ukraine continues to frustrate some partners in the West, yet, as always, Ankara knows it has a unique strategic position at the crossroads of Europe, Russia and the Middle East, and will make every effort to exploit it.

As Maryna Vorotnyuk, a leading expert on the Black Sea region at the Royal United Services Institute (RUSI) in London, told DW on August 5: “First of all, Turkey's position in relation to Ukraine and Russia is quite complex and ambiguous. Although Turkey is a member of Nato, it has always tried to position itself as a bridge between the West and Russia. Turkey has its own strategic national interests, and it is not in its interest to take an overtly pro-Nato or pro-Russian position, or a pro-Ukrainian position. The fact that it has managed to play the role of mediator between Ukraine and Russia in this grain agreement [to allow Ukrainian vessels carrying grain to sail to world markets] is probably evidence that Russia also sees Turkey's role as quite useful for Russian interests — and so, of course, it seeks to extract some diplomatic and political dividends from this for itself. The lifting of the blockade of Ukrainian ports is a very important event, and Turkey's role in this is really significant.”

Reflecting on Russian “red lines”, the analyst added: “Turkey is taking great care not to cross these red lines. This means: yes, the supply of Bayraktars [Bayraktar TB2 combat drones made by Turkey’s Baykar] is a sore point in Russian-Turkish relations. Turkey is treading on Russia's toes in this respect. But at the same time it is doing everything it can to ensure it doesn't hurt too much, and is trying to compensate for it by making concessions in other strategic areas. For example, it is trying to respond with great caution to Russian policy in the Black Sea. Even though Turkey is an extremely important player in the Black Sea region, we still see it allowing Russia to dominate the Black Sea.”

Turkey, said Vorotnyuk, “is trying to offer Russia certain dividends, in that it has not joined in in imposing sanctions, did not close its airspace to Russian planes after [the start of the invasion of Ukraine on] February 24 — thereby allowing Russian planes to fly internationally — and welcomes Russian tourists.”

Another unanswered question left by the Erdogan-Putin talks is whether the Kremlin might now be minded to approve new Turkish military operations in Syria. Erdogan says they are needed in the pursuit of Kurdish militants and terrorists whom he says pose a threat to Turkey, though the suspicion among critics is that they would serve his interests in rousing nationalism ahead of the elections. Russia has so far not consented to the military move. But following the Sochi meeting, on Syria, Putin and Erdogan reaffirmed a “determination to act together and in close coordination with each other in the fight against all terrorist organisations”.

Putin signs off annexation of four Ukrainian regions
Kremlin preparing for a protracted conflict by putting Russian economy onto a war footing
Russia’s industrial output decline slows to only 0.1% in August