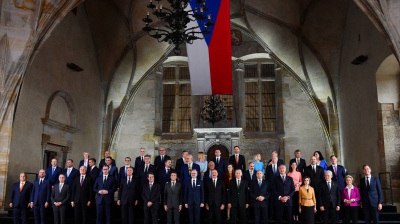 A brave new European negotiating platform has been born with the launch of the European Political Community (EPC) at a summit of political leaders at Prague Castle on October 6.

The concept of the EPC – which was announced in May by French President Emmanuel Macron, then the rotating European Union Council President – had initially been greeted with suspicion, especially by EU candidate countries, who saw it as yet another attempt by France and the other founding EU member states to put their applications on ice.

Other countries feared that it would merely duplicate existing formats, such as the Council of Europe, which has specialised in topics such as democracy, human rights and the rule of law.

Yet the public verdict, at least from the leaders of the 44 countries attending the summit, was that the new format was welcome, because it allowed them to discuss pressing issues in an informal way. There were no jointly agreed communiqués or resolutions at the end, meaning more time for discussion and less haggling.

"We wanted to create a space for the exchange of views between European countries,” said Czech Prime Minister Petr Fiala, the current European Union Council rotating president, at the end of the summit. “A space that is not bound by the need to accept official conclusions, to fight over words."

The leaders were split up into roundtable discussions focused first of all on peace and security, and secondly on the related issues of the economy, energy and climate change. Macron said afterwards that fruitful future topics could be securing key infrastructure, defending against cyber attacks, building a support fund for Ukraine, and creating a pan-European energy policy.

The summit was seen as a triumph for the French president, who has become the dominant EU player in Central and Eastern Europe since the retirement of German Chancellor Angela Merkel.

It was also seen as a success for Fiala, leader of the right-wing and Eurosceptic Czech Civic Democratic Party, but also a pragmatist who at a time of war in Europe sees the importance of anchoring the country firmly in the EU and Nato.

Under the country’s populist leaders, President Milos Zeman and former premier Andrej Babis, Czech foreign policy had often been seen as muddled and sometimes too close to Moscow’s line. But Zeman – who is now in a wheelchair – has much less hold over Fiala’s government and anyway, he has publicly disavowed his former ties with Putin following the invasion of Ukraine.

During the summit, Zeman was confined to merely making bon mots at dinner and holding bilateral meetings with two of the authoritarian leaders present: Hungary’s Viktor Orban and Serbia’s Alexandar Vucic.

In terms of the goals of the summit, one of the chief ambitions was isolating Russia (and its client state Belarus) and rallying support for Ukraine. Ukraine President Volodomyr Zelinskiy addressed the leaders by video link, while Russia and Belarus were the only significant countries not invited from the whole of Europe.

“We have very clearly displayed the unity of 44 European leaders in condemning Russian aggression and expressing support for Ukraine,” Macron told reporters after the summit.

Another goal achieved was symbolically inviting the UK back into the European family after its self-harming decision to leave the EU. New UK Prime Minister Liz Truss appears to have held successful meetings with Macron and German Chancellor Olaf Scholtz among others, even though she also reportedly felt it necessary to demand that the Czechs haul down the EU flags that always fly over Prague Castle.

The West Balkan countries and Georgia seemed to go away less suspicious of the EPC, and the aspiring candidate countries were given the symbolic present of the next summit being held in Moldova in May. Summits will henceforth take place twice a year, one in an EU state, and one in a non-EU country.

The most significant concrete achievements took place in the bilateral meetings at the fringe of the summit.

Armenia and Azerbaijan held a series of meetings, both with and without European Council President Charles Michel, who has been acting as a mediator. The two sides agreed that civilian EU observers would be sent to their mutual border, in another sign of how the EU has become a major player in that region since Russia’s disastrous invasion of Ukraine.

There were also some hiccups. Erdogan launched a tirade against Greece’s Kyriakos Mitsotakis at the dinner, appearing to threaten “night attacks” on Greek islands just off the Turkish shore. Vucic also criticised Croatia for not helping Serbia to get access to Russian oil through its Janaf pipeline, while Croatia’s Andrej Plenkovic responded by questioning why Belgrade had not joined the EU sanctions against Putin.

But in any family gathered for a birth – especially one with 44 members – it is inevitable that some of the relatives are going to disgrace themselves.

VISEGRAD BLOG: Race for Prague Castle will be landmark for Czech democracy

VISEGRAD BLOG: When Eastern European states speak out they are now listened to
VISEGRAD BLOG: Race for Prague Castle will be landmark for Czech democracy
VISEGRAD BLOG: Slovakia's right wing once again fails the test of leadership