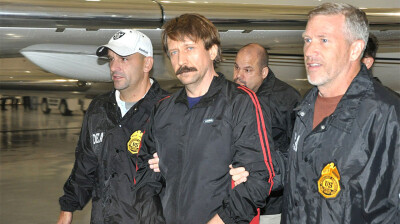 Russian arms dealer Viktor Bout was one of the world's most wanted men and sold weapons to sanctioned regimes around the world. He was arrested in a sting operation in Bangkok in 2010 and has served 13 years of a 25-year prison sentence in the US. / bne IntelliNews
By bne IntelliNews December 9, 2022

The US basketball star Brittney Griner was released from a Russian jail on December 8 in a prisoner swap for notorious arms dealer Victor Bout, known as the “Merchant of Death”, who was serving a 25-year sentence in a US prison for arms trafficking.

The two prisoners were exchanged in Abu Dhabi Airport before flying home, and both received full pardons. Another American, Paul Whelan, remains in Russian prison on espionage charges and was not included in the deal.

The elaborate swap involved two private planes bringing the pair to Abu Dhabi Airport from Moscow and Washington, and then flying them home. Footage on Russian state media – apparently provided by Russian security services – showed them crossing on the tarmac with their respective teams.

"The Russian citizen has been returned to his homeland," the Russian foreign ministry said in a statement after the swap was completed.

Griner was arrested when transiting Moscow after Russian border guards found some e-cigarette cannabis oil in her luggage. She was intending to play basketball in Russia during the off-season in the US.

The Kremlin has been pushing for Bout’s release for years and commentators believe it has been arresting US citizens on trumped up charges to gain leverage in prison swap talks. This swap comes after months of talks mediated by the United Arab Emirates (UAE) government.

Bout arrived in Moscow to a media circus, where he was met by his mother and wife. Bout's wife Alla told Russian TV she had spoken to him two days ago: "He was supposed to call me tonight. Now we'll see each other and hug each other. That's better than any phone call."

Russia's Human Rights Commissioner Tatyana Moskalkova was amongst those that met Bout and called him a "wonderful man", adding his release was an early New Year’s gift.

"The swap of Viktor Bout for US basketball player Brittney Griner can truly be described as a New Year gift. I think everyone who followed the ordeal of this wonderful person, who had fallen victim of US insinuations, is now filled with joy," Moskalkova said.

The Russian press played down his arms-dealing background and instead referred to him as “the entrepreneur.”

Marina Butina was also waiting on the tarmac in Moscow; she now works for RT and is a Duma deputy but was herself arrested and jailed in the US for espionage before being sent home in another prisoner swap.

Griner flew to Texas to her wife. Speaking in the Oval Office after the swap was completed, Griner's wife Cherelle praised the efforts of the Biden administration, saying: "I'm just standing here overwhelmed with emotions."

"She's safe, she's on a plane, she's on her way home after months of being unjustly detained in Russia, held under intolerable circumstances," US President Joe Biden told reporters at the White House. "This is a day we've worked toward for a long time. We never stopped pushing for her release."

The US had been pushing to include Whelan in the deal; he is a former marine and was arrested holding compromising information that Russia claims was classified and passed to him by spies.

Biden offered no details on the talks to include Whelan but did say that the Russians “treated Whelan's case differently.”

"The choice before us was one or none," US Secretary of State Antony Blinken told CBS News. "And the president decided that it was important to at least bring Brittney home now and continue to work on getting Paul back too."

Bout's lawyer, Alexei Tarasov, told Russian TV that the US wanted two of its citizens returned, but Russia's foreign ministry complained that "Washington categorically refused to engage in dialogue".

Whelan told CNN he was "greatly disappointed" more had not been done to free him, adding he had committed no crime: "I don't understand why I'm still sitting here," he said.

Griner, a two-time Olympic gold medallist and star of the Women's National Basketball Association's Phoenix Mercury, was arrested on February 17 after spending a few months playing professional basketball in the Russian regions. She claimed the cannabis was for medical purposes to relieve sports injury pain and that she had made an “honest mistake”, as Russia doesn’t recognise the use of medicinal marijuana. She was sentenced on August 4 to nine years in a penal colony.

Bout was born in Tajik capital of Dushanbe in Soviet times. He began his career in the Soviet military and is believed to be fluent in six languages, including Arabic, Persian and Esperanto, the Moscow Times reports. Following the collapse of the USSR in 1991, at the age of 25 he paid $120,000 for three Antonov cargo planes that he then leased for long-haul flights from Moscow, he said in an earlier interview, before getting into the arms trade.

Bout was 13 years into a 25-year prison sentence for arms dealing. He had been one of the world's most notorious arms dealers, selling arms to Afghanistan, Asia and Latin America. His deals broke UN arms embargoes with sales to Angola, Liberia, Sierra Leone and DR Congo, amongst many others.

“Viktor Bout's Afghanistan dealings were always controversial,” Samuel Ramani, an associate fellow of the Royal United Services Institute for Defence and Security Studies at Oxford University, said in a tweet. “Bout maintained that he did not arm the Taliban or al-Qaeda but did have ties to [opposition and guerrilla leader] Ahmad Shah Massoud's Northern Alliance and helped broker the release of Russian hostages in 1995.”

Russian Ambassador to the US Anatoly Antonov said the same day that Russia will continue its work to release all Russians who have been jailed by the US. "We want to assure you that we will continue our energetic work to release all Russians jailed in the United States, and we will not rest until all our compatriots return back home," he said in a video address to Bout, published by the Russian embassy.

"I made it. That's the main thing," Bout told Russian television on his arrival, adding he had not been told what would happen, reports Reuters.

"In the middle of the night they simply woke me up and said: 'get your things together'," he told the reporters.

Bout was detained in Thailand’s capital of Bangkok in 2008 in a US sting operation where he thought he was meeting with Colombian guerrillas and arrested under a warrant issued by a local court at the behest of the US. He was charged with illegally supplying weapons to a rebel group known as the Revolutionary Armed Forces of Colombia, which is designated as a terrorist organisation by the US. Bout was extradited to the United States two years later. In April 2012, he was sentenced to 25 years in jail and given a $15mn fine.

The heir to the Saudi throne has good relations with Russia's Vladimir Putin and in September he helped co-ordinate a complex swap of hundreds of prisoners held by Russia and Ukraine.

White House spokesperson Karine Jean-Pierre denied that the UAE had played any role, saying the talks were exclusively between the Kremlin and the White House. "There was no mediation involved," she said.

The failure to include Whelan in the deal has been criticised by former US president Donald Trump and some Republicans.

"What a 'stupid' and unpatriotic embarrassment for the USA!!!" Trump wrote on social media, Reuters reports, adding that getting both US citizens out of Russia should have been easy.

A Biden administration official said the United States had proposed different options for Whelan's release and that Russia's "sham espionage" charges against him were the reason it treated his case differently.

Bout’s life inspired the 2005 Hollywood film Lord of War starring Nicholas Cage, which was loosely based on his life.