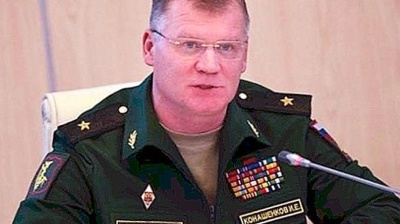 Russian defence ministry spokesman Igor Konashenkov announced that some troops on exercises near the border with Ukraine were being sent home. / wiki
By bne IntelIiNews February 15, 2022

Russia’s defence ministry has announced that some Russian troops are being withdrawn from the border with Ukraine as their military drills have come to an end.

Spokesman for the ministry, Igor Konashenkov, said on February 15 in televised remarks that soldiers that have completed this month’s military exercises, who have been deployed from bases in the western and southern military districts of Russia, would be returned home, whereas those that have travelled further, namely from Russia's Central and Far Eastern bases, would remain where they are for the moment.

On the same day Russia’s State Duma backed a resolution calling for diplomatic recognition of Eastern Ukraine’s pro-Russian Donbas People’s Republics, that was delayed from a decision a day earlier.

The Russian parliament’s motion calls for Putin to formally recognize the Donetsk and Luhansk People’s Republics, both of which declared independence from Ukraine in 2014. No other country currently recognizes the republics as sovereign states. The resolution is not binding, and will now be sent to Putin for "feedback."

The decision gives Russia the possibility to hive the Donbas region off into an autonomous region controlled by Russia.

Russian presidential spokesman Dmitry Peskov commenting on the decision said that the Minsk II process will still take priority, leaving the door ajar for more diplomatic talks, but putting pressure on Ukraine to complete the Normandy Four talks that resumed at a meeting in Paris on January 27 after a two-year hiatus.

Taken together the two events are a "carrot and stick" approach that is designed to show Scholz Russia is willing to cooperate but still has many dirty tricks up its sleeve should  the negotiations not go well.

However, Nato said on February 15 that it had not yet seen signs of a reduced military presence and that Moscow still had the means to mount an attack.

Jens Stoltenberg, Nato secretary-general, warned that "so far we have not seen any sign of de-escalation on the ground". Nato had not seen “any signs of reduced Russian military presence on the borders of Ukraine”, he stressed, in remarks quoted by the Financial Times. “What we need to see is a significant and enduring withdrawal of forces, troops and not least the heavy equipment."

He added that there was still reason for “cautious optimism” given signs from Moscow that Russia wished to continue with diplomacy. “Russia still has time to step back from the brink. Stop preparing for war.
And start working for a peaceful solution,” he said.

The defence ministry announcement follows on from comments made by Russian Defence Minister Sergei Shoigu to Russian President Vladimir Putin at a meeting on February 14 in which he said military exercises were coming to an end and some exercises had already been completed.

While the details remain vague, observers hope that the return of troops to bases is at least a gesture by the Kremlin indicating that it is willing to de-escalate tensions that have soared in recent days following a briefing by White House national security adviser Jake Sullivan on February 12 warning that a Russian attack on Ukraine could come “any day.” US President Joe Biden went further on the same day, predicting the attack would start on February 16.

Russian Foreign Ministry spokeswoman Maria Zakharova suggested Tuesday's news would show it was the West that had been raising tensions with its accusations that there is an invasion plan.

"February 15, 2022, will go down in history as the day Western war propaganda failed. Humiliated and destroyed without a single shot being fired," she wrote on social media.

The announcement also tallies with assurances given to French President Emmanuel Macron that troops would be sent home after the exercises were over. Macron said he was given these assurances during his meeting with Putin at the start of last week – though the Kremlin later denied it.

The withdrawal announcement comes as German Chancellor Olaf Scholz arrives in Moscow for one-on-one talks with Putin. Scholz is the last major EU leader to meet with the Russian president in the round of talks on the eight-point list the Russian Foreign Ministry sent Nato allies in the middle of December, laying out its demands for a new security deal.

It also comes after Russian Foreign Minister Sergei Lavrov said at the February 14 meeting with Putin and Shoigu that diplomacy had not been exhausted.

“There is still a way forward. Talks shouldn’t continue endlessly, but at this stage, I would propose to continue and increase them,” Lavrov said.

The markets immediately reacted to the news of the troops leaving with the ruble gaining more than a ruble against the dollar to strengthen from over RUB77 to RUB75.2 at the time of writing. The RTS stock index gained some 80pp to return to 1,500 where it was trading as geopolitical fears eased somewhat with Macron’s arrival in Moscow.

Ukrainian bonds reacted even more vigorously, rising 6% on the news. Ukraine’s bonds have been particular unpopular since this crisis began to gather momentum.

As cited by the Guardian, spokesman Konashenkov said: “Units of the southern and western military districts, which have accomplished their missions, are boarding trains and trucks and will head for their garrisons later today.”

The defence ministry, meanwhile, released a video of Russian tanks and other heavy weaponry being loaded on to railcars, the Interfax news service reported.

Russia has been holding large unscheduled joint military exercises with Belarus. They have to date involved more than 30,000 troops and a variety of sophisticated hardware. The exercises are slated to end on February 20.