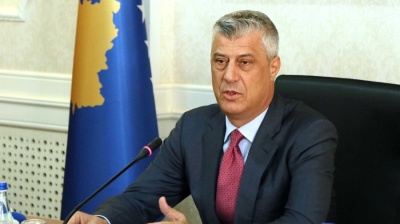 By Valentina Dimitrievska in Skopje November 5, 2020

Kosovo’s President Hashim Thaci resigned on November 5 after the indictment for war crimes filed against him by The Hague-based Specialist Prosecution Office (SPO) was confirmed.

On June 24, the SPO said it had indicted Thaci and other politicians for crimes against humanity and war crimes, including murder, disappearance of persons, torture and persecution during and after the 1998-1999 independence war between ethnic Albanian separatists from the Kosovo Liberation Army (KLA) and Serbia.

“As I promised I will not go before the court as president of Kosovo. To defend the integrity of the Kosovo presidency, the state and people of Kosovo I resign from the position,” Thaci was cited by Prishtina Insight.

Thaci urged for calm and unity in light of the news, saying that the indictment against him and other ex-KLA fighters is “a small price to pay for the freedom” of Kosovars.

According to the constitution, after the resignation of the president, the speaker of the parliament, currently Vjosa Osmani, is taking his position.

Thaci announced his resignation after former parliament speaker and leader of the Democratic Party of Kosovo, Kadri Veseli, said he was stepping back from political duties in order to defend himself from war crimes charges.

In July, after being questioned for four days in The Hague-based court, Thaci said that he is innocent.

Over 100 other former KLA members have been interviewed by the Hague prosecutors so far, including former PM Ramush Haradinaj.

The Hague-based war crimes court also confirmed the indictment against ex- senior member of KLA, Rexhep Selimi, who currently serves as MP and head of the parliamentary group of the opposition Vetevendosje.

After Thaci resigned his son Endrit made an emotional post on social networks. He said his father had won the battles for freedom and the republic, adding that he would now lead the battle for justice.

"My father won the battle for freedom. And we are free. He also led the battle for the republic. And we became a state and we will remain. He will now lead the battle for justice. Because my father, his comrades and the whole war was right. I will wait impatiently for you to return home soon," wrote Endrit Thaci on his Instagram account.

The government of Kosovo said in a statement that it strongly believes in the just fight of the KLA for the freedom of the country.

The KLA fought for the liberation of our country, for the protection of the territory, not in foreign lands, and as such enjoyed the support of the international community, which culminated in the Nato bombing campaign, it said.

Albanian PM Edi Rama reacted after the confirmation of the indictment against Thaci, saying that he will have the support of Albania in the process.

Rama said that the “absurd process” against the Kosovan president will “seal the purity of the KLA and the impossibility to rewrite it”.

Ali Ahmeti, leader of the junior partner in North Macedonia’s government, the ethnic Albanian Democratic Union for Integration (DUI), who was also questioned in the Hague for his role in the KLA, said that the KLA war was a just war of the Albanian nation for freedom and self-determination but also for justice and the rule of justice.

"I am convinced that my comrades, brothers-in-arms, will return victorious,” Ahmeti said.

COVID-19 blighted dealmaking in 2020 but a strong Q4 indicates a sharp rebound this year.

Mercedes-Benz will halt production at its plant for 10 days due to the global shortage of computer chips.

Anti-corruption blogger and activist Alexei Navalny had hardly been in jail for 24 hours when he dropped a bomb on the Russian public: a two-hour long documentary on his investigation into the corruption network surrounding Vladimir Putin.