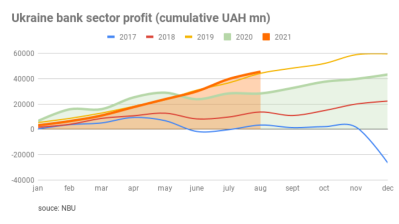 Ukraine's banks have come through the coronacrisis with few problems and this year have even earned a little more profit than in 2019, the last year of strong growth
By bne IntelliNews September 29, 2021

Ukraine’s banks have emerged from the 2020 coronacrisis healthy and in profit thanks to the clean-up of the banking sector in recent years and the recovery of the economy, according to the latest results reported by the National Bank of Ukraine (NBU).

Ukraine’s banks earned UAH5,827mn ($219mn) of profits in August after they made no money at all a year ago in the same month. However, that result was still down on the UAH7,567mn they made in 2019, the last year of strong growth, but well ahead of the results in the two years prior to that when Ukraine was still recovering from the 2014 collapse.

The health of the sector was underscored by the NBU’s 2021 sustainability stress testing of banks that found the banking industry has become more resilient to external shocks, reports the Kyiv Post. Stress testing uses computer-simulated models to analyse how banks cope with modelled economic shocks. The NBU skipped stress tests in 2020 due to the pandemic.

A total of 30 Ukrainian banks, accounting for 93% of all banking assets in the country, underwent stress testing. An independent auditor confirmed that, in general, banks showed positive performance indicators.

The NBU stated that “the banking sector is now quite resilient and ready for the planned increase in capital requirements, despite the impact of last year’s crisis.”

Out of the 30 banks tested, 20 revealed problems with their capital risks, lack of capital or pre-capitalisation, requiring fundamental restructuring or transformation, the NBU reported.

Overall the capital adequacy ratio (CAR) of banks, the share of cash they need to keep on deposit to meet withdrawal demands, for the sector as a whole remains a very healthy 21.29% in August – well ahead of the 10% considered the norm in the industry, although the shock-prone emerging market banks tend to prefer a CAR of 20%. However, the CAR has decayed somewhat from a peak of 23% in May, but that is partly due to banks using more of their capital to fund the growing loans business.

Capital requirements for banks have decreased by UAH32.1bn ($1.2bn) over the past two years, but as the chart shows, banking capital has been climbing steadily for almost five years.

Nevertheless, non-performing loans (NLPs) remain the major unresolved issue for Ukraine’s banking sector, although as 90% of the bad debt is provisioned for NPLs this represents no danger to the financing system.

Retail NPLs have been falling continuously in the last five years and despite a small bump in 2020 during the pandemic, the fall in retail NPLs resumed last autumn and the NPL share of retail loans is currently at 21.2%.

Corporate NPLs have been decreasing less rapidly; however, the high ratio is largely due to the large volume of bad debt at the state-owned PrivatBank that saw its former owners allegedly siphon $5.5bn out of the bank via a complex web of shell companies and related party loans that the government is now trying to recover via the courts.

Still, NPLs at other banks have been falling steadily, as the banks can use profits to retire some debt, and the improving economic conditions allow others to pay off debt that had been restructured to give companies relief during the pandemic shock.

Corporate NPLs are now well under the 50% mark and were at 42.9% in August. Privately owned banks lead the way with only 11.4% of impaired debt, followed by foreign owned banks (23.6%) and then state banks (38.6%). At PrivatBank a whopping 71.2% of loans are not performing, but even here that number is down by 8% from August a year earlier.

This article is from bne IntelliNews Ukraine monthly country report. Sign up to receive the report to your inbox each month, which covers the slow moving macro- and micro-economic trends, the major political news and a round-up of the main sectors and corporate news. First month is free and you can unsubscribe at any time.

Want to see the latest issue? Questions? Get in touch with sales@intellinews.com

Across three decades fabulous riches were secured at home and offshore in oil, gas, metals, banking and luxury property.

UniCredit is considering a takeover of Russia's Otkritie Bank, but rising geopolitical tensions coupled with an increasingly competitive financial environment could jeopardise the plan.

Who needs a war?
8 hours ago
Outbreak of calm grips Ukraine
9 hours ago
Primark to launch in Romania as it pursues CEE expansion
15 hours ago
All eyes fall on Nazarbayev clan’s extraordinary wealth as Kazakhstan’s Tokayev asserts authority by targeting super rich
1 day ago
UniCredit's hopes of acquiring Russia's Otkritie Bank marred by geopolitical tensions
4 days ago