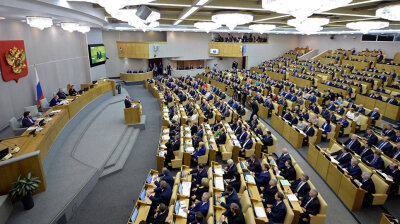 This brings the total number of Russian deputies sanctioned by the UK to 400. / Image: bne IntelliNews.
By bne IntelIiNews March 12, 2022

The UK has imposed new sanctions on 386 members of Russia’s Duma – the lower house of parliament. The sanctions are a retaliation for their support of the recognition of Ukraine’s Luhansk and Donetsk as independent from Ukraine, according to a statement by the Foreign Office.

The sanctions will ban those listed from travelling to the UK, as well as freezing their assets in the country and preventing them from doing business there.

“We’re targeting those complicit in Putin’s illegal invasion of Ukraine and those who support this barbaric war,” said Foreign Secretary Liz Truss. “We will not let up the pressure and will continue to tighten the screw on the Russian economy through sanctions,” she added.

“Together with our allies, we stand firmly beside our Ukrainian friends. We will continue to support Ukraine with humanitarian aid, defensive weapons and diplomatic work to isolate Russia internationally.”

Friday’s sanctions build on those implemented against oligarchs and enablers of Putin’s regime the day before. Roman Abramovich was one of the oligarchs whose assets were frozen. The UK now claims to have sanctioned 18 of Russia’s oligarchs, as well as 800 entities, subsidiaries and high-value individuals, as well as now nearly 400 members of the Duma.

Meanwhile, France’s President Emmanuel Macron vowed on Friday to continue ramping up the economic pressure on Russia in response to its escalations. He promised “massive further sanctions” if Russia’s army besieges Kyiv or intensifies bombing in Ukraine. He hinted that such a scenario could justify sanctions on Russian energy, saying: “In that case nothing is off the table. Nothing is taboo.”