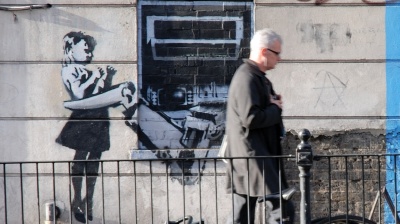 'Girl seized by an ATM' artwork, attributed to Banksy. To your average Turkmen cash machine user, the piece might have particularly sinister connotations.
By bne IntelliNews August 28, 2019

Police in Turkmenistan's eastern Lebap Region have reportedly started detaining people for standing in long queues at ATMs in their efforts to withdraw money amid national cash shortages.

The crackdown on ATM queues by the police—reported on August 27 by RFE/RL—comes in the wake of Turkmen President Gurbanguly Berdimuhamedov on August 19 publicly criticising people who stand in lines at ATMs. The autocrat also reprimanded the governor of the tightly controlled Central Asian country’s central bank, Merdan Annadurdyev, for  "weak control over ATM operations".

Citizens of remote Turkmenistan are only allowed to withdraw a maximum of Turkmenistani manat (TMT) 200 ($57) per day using their bank cards, but cards are the only way to access salaries, pensions and student stipends in the country. As such, citizens often even have to spend night hours in long lines at ATMs to get cash, especially since the machines often run out of banknotes. Residents of the Turkmen provinces find themselves frequently relying on middlemen, who can get cash from the restricted capital of Ashgabat, where ATMs are better provisioned. This unofficial service is provided in exchange for a 10% fee.

The gas-rich country has been experiencing cash and food shortages since economic and budgetary struggles were triggered by weak world hydrocarbon prices and the loss of gas export contracts. Shortages of basic goods at stores, which have led to a passport-based bread rationing system, along with the removal of longstanding government subsidies for water, gas and electricity provision are not making the situation any cozier.

“Edge of catastrophe”
In mid-July, a report issued by British think tank Foreign Policy Centre concluded that Turkmenistan is “teetering on the edge of catastrophe” and investors should be careful about associating themselves with the isolated nation.

On a brighter note for Turkmenistan, this year has seen the country make some progress in reviving its gas export prospects.

China stands as the ex-Soviet country’s main buyer of natural gas and at certain points in the past couple years was its only gas customer. But Turkmenistan recently resumed its gas sales to Russia, although at significantly lower volumes. The current deal with Russia sees gas supplies at 5.5bn cm a year—Turkmenistan’s gas exports to Russia used to stand at 50bn cm decades ago. The tightly controlled Central Asian nation does not officially disclose its gas exports data. But Turkmenistan intends to ship 40bn cm of natural gas to China in 2019 by pipeline, equalling the volume exported to China in 2018, an anonymous government source told Reuters on August 21.