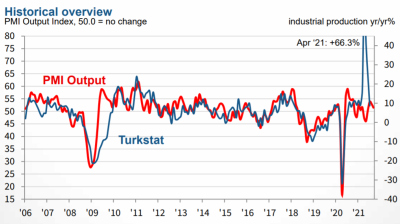 September saw more growth in the Turkish manufacturing sector, though the expansion was slower than what was recorded in the month before, according to purchasing managers’ index (PMI) survey data from Istanbul Chamber of Industry and IHS Markit.

The headline PMI posted 52.5 in September, down from 54.1 in August. Any figure above 50.0 indicates an expansion.

Commenting on the survey data, Andrew Harker, economics director at IHS Markit, said: “Turkish manufacturers were able to build on the recent rebounds in output and new orders in September, recording ongoing expansions in both. In fact, the sustained period of rising new orders has begun to put pressure on operating capacity despite the fact that firms continued to take on extra staff.

“There were some signs that supply-chain disruption is not as pronounced as earlier in the year, but firms still had to face longer lead times and sharp price rises when attempting to secure inputs. As part of efforts to guard against these problems, stocks of purchases were raised to the greatest extent since the end of 2017. This should provide some assistance to efforts to keep on top of workloads in the months ahead.”

Output and new orders have each now risen in four successive months in Turkish manufacturing, IHS Markit noted. Despite capacity being raised, firms signalled a first accumulation in backlogs of work in 14 months, it added.

Total new business volumes were supported by a further marked rise in new export orders and growth of new orders and efforts to expand capacity led firms to increase their staffing levels again in September, and at a solid pace, the survey compiler also said.

The rate of increase in production inventories was the fastest since the end of 2017 amid some reports of safety-stock building to guard against ongoing supply chain disruption, it observed, saying: “There were some signs that supply-chain delays moderated at the end of the third quarter.”

“Currency weakness was also a factor pushing up input costs, which increased at a broadly similar pace to that seen in August. In turn, manufacturers continued to raise their own selling prices rapidly, with the rate of inflation ticking up slightly during the month,” it added.