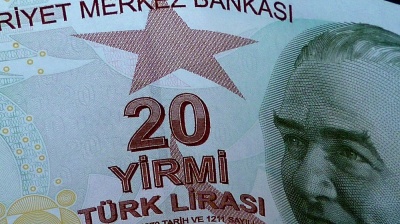 The Turkish lira (TRY) found another all-time low against the dollar on September 29—sinking to 7.8362 compared to the 7.6725 at which it closed at the end of last week—as markets digested factors such as Turkey’s backing of Azerbaijan in its military conflict with Armenia and how last week’s shock rate cut of 200bp has not particularly impressed international investors.

A massive credit boom driven by the Erdogan administration has also taken a toll on the TRY by worsening external imbalances, and the day also saw Turkey take another step to slow lending to businesses and consumers when banking regulator BDDK announced that its asset ratio formula, which compels banks to extend more loans, will be reduced by 5pp to 90% for commercial lenders and to 70% for Islamic lenders.

Looking at Turkey’s involvement in the showdown between Azerbaijan and Armenia over the Nagorno-Karabakh enclave, Timothy Ash at BlueBay Asset Management said: "Fears are that Turkey gets dragged into another regional conflict."

A record pace of lending by commercial banks has resulted in higher imports and a bigger trade deficit, contributing to the lira’s 11.7% decline during the quarter, the worst among peers. In the year to date, it has nearly lost a quarter of its value. Across 2018 and 2019, it lost 36%. By the end of September 28, it was trading in the 7.79s.

One analyst certainly not persuaded by Turkish officials’ attempts to dig their country out of an economic hole is Julian Rimmer at Investec Bank.

In a September 28 note to investors, he said: “I've been looking at Turkey since 1998 and it's always been a complex mkt, technically and politically. With all this experience, though, I can see the CBT [Turkish central bank] has got itself into a pickle but not quite what kind of a pickle because they operate in mysterious ways, nothing is transparent and obfuscation is their default tactic.

“I know that rates are not high enough to attract carry-traders so the lira is set to deteriorate, especially given 8M20 tourism arrivals (and presumably receipts, therefore) -71% yoy. I also know that shorting the lira is prohibitively expensive and the CBT tries to screw people who attempt it. However, I genuinely don't understand what is going on in the fx, credt and swap mkts.

“I should write a paragraph which would contain the following elements... 'Liquidity windows... Weighted avge cost of funding... Rate corridor... Offshore swaps... Net reserves... Swap thresholds... %age of equity... State banks... Cost of carry... Real rates...' And allow you to put that jumble of words and concepts in whatever order you like. Turkey needs another hike and it needs to get rates positive. Last week saw retail investors try and play the mkt again but it will take a lot more than a 200bp hike to persuade the intl investment community to re-enter the Turkish mkt.”