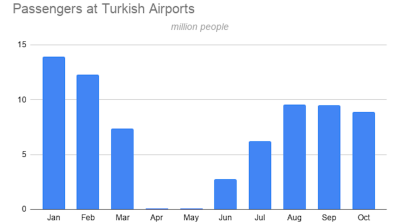 Turkey’s private airlines on November 25 pushed for state help to restructure Turkish lira (TRY) 20bn ($2.5bn) of loans in a meeting with Transport Minister Adil Karaismailoglu, sources “with knowledge of the matter” told Bloomberg on November 26.

The carriers previously met with President Recep Tayyip Erdogan, according to Nane.

The Turkish banking industry has been subject to a non-stop loan restructuring cycle since 2016. More industries join the queue with every crisis, and restructuring efforts are now essentially taking place amid interwoven crisis cycles. The coronavirus (COVID-19) crisis, which has destroyed much of the business of airlines, is clearly the main crisis for the carriers as things stand.

A plus for the Turkish banking industry is that their financial statements are unaffected by the situation and they can release huge profits—this is because of the “regulatory forbearance” exercised by the Erdogan administration.

Earlier this month, Turkish Airlines said in a teleconference on its Q3 financials that it was planning to burn through $250mn of cash per month in Q4, down from $300mn in Q3.

Separately, official data this week indicated that Turkey’s tourism industry is set to suffer a year on year revenue reduction of more than $20bn this year given the huge blow to international tourism caused by the coronavirus crisis.