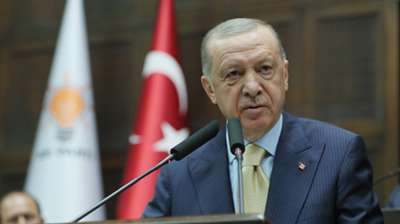 Erdogan, with Turkey mired in a debilitating economic  crisis shocking to Turks in its extent, must go to the polls within a year to seek re-election—thus he can be expected to crank up hard power foreign policy as, performing poorly in the opinion polls, he bids to shore up his nationalist vote.

The Turkish leader last week aimed his ire at Greek Prime Minister Kyriakos Mitsotakis, whom he said "no longer exists" for him following a trip to Washington in which Mitsotakis spoke against the US providing Turkey with F-16 fighter jets. Announcing that the talks, which resumed last year after a five-year hiatus, were suspended, Erdogan accused Greece of airspace violations. Athens may see that as a bit rich, given that in recent weeks it has been Greece accusing the Turkish Air Force of infringing the airspace of various Greek islands in the Aegean Sea a record amount of times.

German Chancellor Olaf Scholz has responded to the tensions by calling on Turkey to exercise restraint towards Greece, a German government spokesperson said on June 1. "The chancellor is of the opinion that, given the current situation [with the Ukraine crisis], it is necessary for all Nato allies to stand together and refrain from provocations among themselves," the spokesperson told a regular news conference in Berlin. "Invading Greek airspace and flying over Greek islands is not okay, it seems counterproductive and against the spirit of the alliance," they added.

Speaking to lawmakers of his AKP ruling party, Erdogan confirmed the talks with Athens under a bilateral cooperation platform, the High-Level Strategic Council, would no longer take place and aimed sharp criticism at Greece, saying: "Don't try to dance with Turkey. You'll get tired and stuck on the road. We are no longer holding bilateral talks with them. This Greece will not see reason."

Greece and Turkey have also long been at odds over issues including overlapping claims over their continental shelves that relate to gas and oil exploration rights, migrants and ethnically split Cyprus.

On May 31, Mitsotakis was reported by Reuters as telling reporters after a European Union summit that he briefed his EU counterparts over Turkey's "aggressiveness" and "provocations which cannot be tolerated by Greece or the European Union".

"I will not be involved in a game of personal insults...," he added.

Turkish Foreign Minister Mevlut Cavusoglu claimed on May 31 that Greece was violating international agreements that determine the demilitarised status of islands in the Aegean. He warned that if Athens did not change its approach, Ankara would launch challenges over the islands' status.

The Greek armed forces are on high alert in the Eastern Aegean Sea.

Retired Greek General Leonidas Tzoumis was on June 1 quoted by VoA as saying that  both countries would stand to lose from a military confrontation, but he warned that Turkish actions may lead to a miscalculation. According to Tzoumis, Greece was facing a classic Turkish game of controlled escalation, one of repeated provocations that can provoke a serious enough incident that would eventually force Greece to negotiate matters like the Aegean Sea dispute and territorial rights that Greece has been refusing to discuss because – the analyst said - it does not want to cede an inch.

Separately, Erdogan, detailing Turkey’s intentions for a military operation in Syria that, to US concern, he flagged last week, said Ankara would target Kurdish armed groups in Tal Rifaat and Manbij.

“We are taking another step in establishing a 30-kilometre security zone along our southern border. We will clean up Tal Rifaat and Manbij of terrorists”, he told AKP lawmakers.

An incursion into Syria to pursue Kurdish fighters who allied with the US in the fight against Islamic State in the country would further rile Washington, already frustrated by Erdogan’s refusal to let Nato process applications lodged by Sweden and Finland. Erdogan has accused the Nordic nations of harbouring Kurdish terrorist groups, something they refute.

Nato Secretary-General Jens Stoltenberg said on June 1 he will convene a meeting in Brussels in the coming days with senior officials from Sweden, Finland and Turkey to discuss Turkey's opposition to Sweden and Finland joining the defence alliance.

"I'm in close contact with President Erdogan of Turkey and with the leaders of Finland and Sweden," Stoltenberg said at a news conference in Washington with US Secretary of State Antony Blinken.