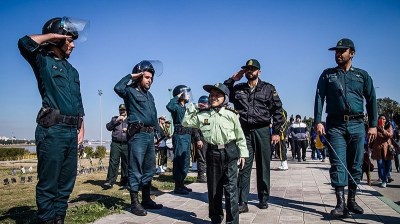 Iranian police officers help to fulfil the last wish of a boy with terminal cancer.
By bne IntelliNews October 30, 2019

The US sanctions regime directed at Iran threatens the access of some Iranians to medicines that treat diseases such as cancer and epilepsy, despite exemptions that should apply to imports of humanitarian goods, according to a report issued by Human Rights Watch (HRW).

“There’s no acute nationwide shortage of medicine in Iran at this point,” Tara Sepehri Far, a researcher at HRW and an author of the report, said at the Atlantic Council think tank in Washington, as cited by Reuters on October 29. “But people who are suffering from rare and special diseases are already seeing the negative effect of sanctions.”

If the situation does not change, “we expect the harm to be even greater,” Far added.

bne IntelliNews reported in November last year how the biggest Iranian charity that supports children with cancer, Tehran’s MAHAK Pediatric Cancer Treatment & Research Center, had warned in The Lancet medical journal that shortages of drugs caused by US sanctions were likely to negatively impact the treatment of patients.

The HRW report said that MAHAK was lacking three key chemotherapy drugs—pegaspargase, mercaptopurine and vinblastine—in May.

Hundreds of people who have epidermolysis bullosa, or EB, which causes fragile, blistering skin, had difficulty accessing medicine after the sanctions were imposed, it added.

Food, medicine and other humanitarian supplies are exempt from the sanctions brought in by the US Trump administration after it unilaterally exited the multilateral 2015 international agreement drawn up to contain Iran’s nuclear programme in exchange for relief from heavy sanctions.

But the US measures have nevertheless deterred several foreign banks from doing business with Iran, including when it comes to humanitarian deals. Imports of grain have been slowed as well.

The US is also attempting to entirely wipe out Iran’s oil exports, and the report noted that as oil shipments fall, it could result in higher inflation and affect the affordability of medicine.

Reuters reported an unnamed US Treasury Department official as conceding that slowdowns in some drug imports were possible. However, the official put the onus on Tehran, which they said must address corruption in the medicine trade. “To blame us for that [import slowdown] is a little more than just disingenuous,” they added.

Last week, the US Treasury and State departments said a new humanitarian mechanism introduced by the Trump administration would ensure “unprecedented transparency” into food and medical trade with Iran. It requires foreign governments and banks to provide the Treasury with an unprecedented amount of information on a monthly basis to ensure no funds are diverted by Tehran “to develop ballistic missiles, support terrorism, or finance other malign activities”.

The move caused some observers to ask whether humanitarian trade would be eased or gummed up. The mechanism requires banks to reveal large amounts of information.