Tokayev sweeps to victory in Kazakh election with only lightweight opposition 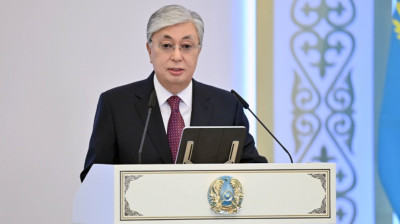 If it runs to its full extent, Tokayev's second term will conclude in 2029. / bne IntelliNews
By bne IntelIiNews November 21, 2022

Kazakh President Kassym-Jomart Tokayev has secured a second term in a snap election. The official preliminary result gave him 81.3% of the vote, but almost all critics were agreed that no substantial candidates were allowed to stand against him.

“We can say that the people have expressed convincing confidence in me as president and all of you,” 69-year-old Tokayev told his staff earlier on November 21, referring to exit polls taken at the election held the day before that strongly favoured him.

Kazakh incumbent Tokayev’s victory was seen as a foregone conclusion. More uncertain was whether or not election day would bring any street protests.  As things turned out, it passed without any turbulence.

On the eve of polling day, the authorities warned of repercussions for holding rallies on election day. Officials remain nervous about any rekindling of countrywide protests following the "Bloody January" events that shook the country to its foundations at the beginning of the year, officially claiming 238 lives.

The Prosecutor-General's Office on November 18 made mention of "a banned group [that] has been calling for illegal rallies and other illegal activities", adding that "those who follow such calls will face legal prosecution." The authorities also arrested dozens of prominent political activists around the country to ensure no protests would be sparked at their behest on election day.

Under constitutional changes brought in this year, Tokayev’s second term is to last as long as seven years.

Given that Tokayev has been in “survival mode”,  improvising his way to staying in power since the January unrest—as well as amid what some believe was a power struggle in the Nazarbayev family and, later, the difficulties of balancing relations with Russia, China and the West during the turmoil caused by Moscow’s invasion of Ukraine—it might be safe to say that Tokayev himself does not know if he’ll continue to stay in power after the end of his second term, due to conclude in 2029.

He has reiterated multiple times that his second term will be his final term—and the constitutional referendum he held earlier this year placed a one-term limit on the presidency—but such pledges don’t always amount to much with leaders in ex-Soviet states; Tokayev may well end up feeling the urge to hold on to power in seven years’ time. Only time will tell.

A former diplomat, Tokayev is also adopting an increasingly independent foreign policy, refusing in any way to back Russia’s aggression towards Ukraine.

The vote consolidates his power as an independent leader no longer in need of backing from predecessor Nursultan Nazarbayev, who ruled for three decades.

During the January unrest, Tokayev, for a long time seen as little more than a stooge while Nazarbayev and his clan continued to rule behind the scenes, showed a ruthless side, ordering law enforcement to “shoot to kill” demonstrators. He has since purged the power structures of the Nazarbayev family.

Tokayev has promised a “new and just Kazakhstan”. Whether this amounts to him paying much more than lip service to the need for real reform and the crushing of corruption is yet to be seen.

Kazakhstan and Russia share a 7,500km-long (4,660-mile) border. There are many revanchist Russians who feel Moscow should one day at least demand that much of the north of Kazakhstan, where many ethnic Russians live, becomes part of Russia. Tokayev has made it plain to Vladimir Putin what he thinks of such separatism, in Ukraine, Kazakhstan or anywhere else.

Recognising separatist authorities around the world would “lead to chaos” he stated, while sitting next to Putin at an event in St Petersburg in the summer.

Anglo-Russian Polymetal looks at switching listing from London to Kazakhstan