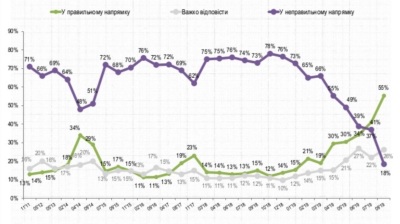 The mood amongst the public since Ukrainian President Volodymyr Zelenskiy came to power has done an abrupt about face and deep pessimism has turned to growing optimism in the future of the country.

For most of the last five years circa 70% of people in Ukraine believed their country was going in the “wrong direction”, but that has collapsed to 18% in September and now the majority (56%) believe the country is going in the “right direction”, according to the latest poll from the Sociological Group Rating. A quarter (26%) remain undecided.

Zelenskiy is currently enjoying record high approval ratings, according to the poll: 71% of respondents are satisfied with the activities of Zelenskiy, while 11% are not and the remaining 18% have not decided.

The president's popularity is still increasing and is already up one and a half times on its level compared to the same period a year earlier.

The government has barely been on the job for two weeks and its new head Ukrainian Prime Minister Oleksiy Honcharuk currently has a 29% approval rating. Two-thirds of the respondents remain undecided about Honcharuk.

Separately 39% of the respondents are satisfied with the activities of the newly elected Verkhovna Rada, 16% are dissatisfied with it and 45% were unable to answer.

The vast majority of the respondents (over 90%) support the initiatives for early termination of MPs' authority for absenteeism, reduction of the number of MPs from 450 to 300, and the removal of parliamentary immunity.

More than 70% support the proposal to give Ukrainian citizens the right to propose legislation, expanding the authorities of the president to appoint the heads of the National Anti-Corruption Bureau (NABU) and the Specialised Anti-Corruption Prosecutor's Office (SAP), as well as increasing the number of human rights ombudsmen. About two-thirds are in favour of enshrining in the Constitution such provisions as a proportional election system and the abolition of legal monopolies. 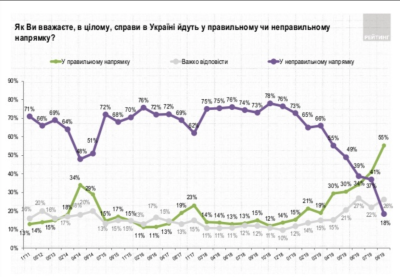 Turkey sees unexpected rise in inflation as lira weakness pushes up prices
17 hours ago
Russia's services PMI bounces back to 35.9 in May from a record low of 12.9% in April, but business still contracting
22 hours ago
Easing of lockdowns offers hope to emerging Europe’s COVID-struck economies
1 day ago
Kazakh manufacturing ekes out PMI expansion in May
2 days ago
A third of Russians are ready to participate in a mass protest against falling living standards
2 days ago