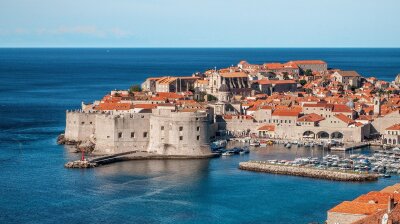 Countries along the eastern Adriatic coast are reporting strong tourism figures for the summer months as their tourism sectors rebound despite rising coronavirus (COVID-19) cases towards the end of the summer.

This follows a year in which the economies of Croatia and Montenegro in particular were devastated by the impact of the pandemic and spring lockdowns in 2020.

A year later, Croatia, Montenegro, Albania and Slovenia are reporting that visitor numbers are close to the pre-pandemic year of 2019, helping their economies rebound.

Figures for August released by the Croatian National Tourism Board (HTZ) in a statement at the beginning of this month put visitor numbers at 4.3mn, which is 86% of the level in August 2019, while the overnights were equal to 93% of pre-crisis levels. The figure also represented a 59% leap compared to August 2020, when tourism collapsed in the country.

“We can be satisfied with the results in the first eight months … the tourist year continues, and this is best evidenced by the fact that at this time there are about 680,000 tourists in Croatia, which is at the level of the number of tourists we had at this time in 2019. This is a great announcement for September, in which we want to continue at the same pace to further boost economic development and ensure tourism has an even better starting position over the next year,” commented Minister of Tourism and Sports Nikolina Brnjac, according to the HTZ release.

In August, Prime Minister Andrej Plenkovic commented that Croatia had already received more visitors since the start of the current season than in the whole of 2020, He added that higher revenue from fiscalised income was generated by the end of July than at the same time in 2019. The Croatian government expects strong GDP growth in the second quarter. Plenkovic said that he was sure the tourist season would make a big contribution to growth in Q3 as well.

Economy and Sustainable Development Minister Tomislav Coric forecast that Croatia's economy would expand by more than 5% in 2021 on the back of excellent results in the tourist sector so far this year. “Considering the trends in the tourist season and results in July and in the first half of August, I can point out that we in the government expect that our forecasts of economic growth of more than five percent will turn out to be correct,” he told Hina news agency in mid-August.

The strong tourism sector has already had a visible knock-on effect on the wider economy in Croatia, where retail trade turnover increased by 12.8% annually and by 2.2% in monthly terms in July.

Montenegro’s tourist arrivals were almost at pre-crisis level in July, when 172,906 people visited the country. This was significantly higher compared with the 32,855 visitors a year earlier, and nearly at the level of 190,322 recorded in July 2019.

The official statistics confirmed a comment by Economic Development Minister Jakov Milatovic, who wrote on Twitter that the tourist season was above expectations. In July, the government said that it would draft a strategy for the development of the tourism industry in 2021-2025.

Official figures for August are not yet out, but Prime Minister Edi Rama announced on August 16 that Albania had received more foreign tourists in the first half of August 2021 than it did in the same period of 2019.

However, there were some significant changes in the source countries of Albania’s visitors.  The number of arrivals from neighbouring Kosovo was sharply up and there were also large numbers from North Macedonia and Montenegro. Meanwhile, there were decreases in the numbers from Greece, Italy, the UK, Poland, Spain and Germany.

Foreign tourists in Slovenia registered just over 406,500 arrivals in July, which is 63% more year on year, and just over 1mn overnight stays, up 55% y/y, the statistics office said on August 25.

In July, local tourists recorded more than 361,000 arrivals, down by 11% y/y and just over 1.2mn overnight stays, less by 12% y/y. There were also large numbers of arrivals from central European countries, in particular Germany and Austria.

However, while tourists were sunning themselves on the beaches, a new wave of the virus has been building in the region.

Croatia was the first country in the region to tighten restrictions, back in July, and was swiftly followed by Montenegro.

Croatia’s Interior Minister Davor Bozinovic announced new restrictions from July 26 for the Adriatic coastal area due to the increasing number of new coronavirus cases. This gave the government the choice between introducing new curbs – that might dampen the tourism sector that is a critical part of the economy – or allowing the virus to spread.

Bozinovic said at the time that the situation in Croatia’s coastal area was better compared to the other Mediterranean countries but the incidence was rising and the authorities had to take steps to prevent a further worsening of the situation.

In Montenegro, the government decided on July 23 to close all discos and night clubs, reopening after August 2 only for people who have coronavirus vaccines, negative PCR tests or have had the virus in the past 180 days.

The highly infectious delta variant of coronavirus (COVID-19) has been spreading in Southeast Europe recently, and countries across the region have reported a sharp upturn in cases.

As well as putting plans in place to protect healthcare systems, governments are also seeking to accelerate vaccination programmes as the number of people getting vaccinated has tailed off recently.

Croatian president says Western sanctions aren’t working
2 hours ago
Kosovo’s PM Kurti says risk of new conflict with Serbia is high
2 hours ago
End of Vienna talks means US, Iran political approvals now needed to revive nuclear deal
10 hours ago
Western capitals wonder what kind of sanctions deal Erdogan may have cooked up with Putin
1 day ago
Leaders of Serbia and Kosovo to meet as they pull back from brink of conflict
1 day ago