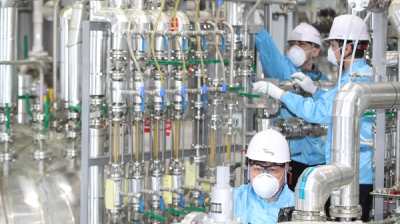 The plant will be EcoPro BM's first European factory unit and its first production facility outside Korea.
By bne IntelliNews December 9, 2021

South Korean EcoPro BM is to open its first European factory unit and its first production facility outside Korea in Hungary, with a HUF264bn (€720mn) investment.

The company is one of the largest manufacturers of cathode material for lithium-ion batteries and is the first company globally to produce cathodes with a nickel content of 80%.

The investment consolidates Hungary's position as one of the European centres for battery production for electric vehicles.

The plant in Debrecen, eastern Hungary, will turn out 108,000 tonnes of cathodes annually, enough for 1.35mn electric vehicles, Minister of Foreign Affairs and Trade Peter Szijjarto said in Seoul. Szijjarto said he held talks with representatives of three other South Korean companies already present in Hungary, which will announce new investments soon.

The first phase of the investment will be completed in H2 2024, creating 631 jobs. The second phase will finish a year later.

Szijjarto did not reveal the size of the grant Hungary is providing the South Korean company. Given the size of the deal, it needs to be cleared by the European Commission.

More than half of all investments in Hungary came from East Asia in 2021 and the bulk of that went to the automotive sector, which accounts for 30% of industrial output. South Korea was the largest investor in 2019 and so far this year it shared the top rank with China.

South Korea’s top cathode material producer’s investment is the second-biggest one of the year in Hungary and the seventh-largest in four years, tailing another by SK Innovation. The South Korean battery maker is expanding its production base in Hungary with a €2.3bn investment. The plant’s 30 GWh is only slightly less than Tesla's "gigafactory".

SK Innovation strives to achieve 125 GWh of production capacity by 2025, a significant part of which will be provided by the capacity of the Hungarian plants.

In addition to the proximity to the European markets, the presence of country peer battery makers was a major factor in bringing EcoPro’s production to Hungary.

Founder and chairman Lee Dong-che flagged new investments and named Hungary as a potential site in an October interview. EcoPro’s products will be supplied to Samsung SDI, which opened its first electric battery plant outside the South Korean close to Budapest from a HUF100bn investment.

Mooted move by Milos Zeman to appoint his own man to key post could have led to drawn-out constitutional dispute.

If the reform of disciplining judges is passed it will mark a watershed in the relations between Warsaw and Brussels, demonstrating the effectiveness of the European Commission's new Conditionality Mechanism.

Heart-rending day after disaster full of stories of survivors trapped under rubble sending desperate voice notes from their mobile phones.