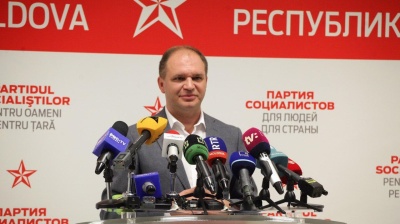 By Iulian Ernst in Bucharest November 4, 2019

Ceban took 52.5% of the votes against 47.5% for Nastase, according to preliminary results after votes in 306 of the 307 precincts in Moldova’s capital city were counted.

The result will help President Igor Dodon strengthen his criticism against the government headed by pro-EU Prime Minister Maia Sandu, and allow him to gain a tighter grip over the administrative matters.

The Socialists are gradually gaining more popular support after reaching an unexpected coalition agreement with pro-EU ACUM bloc to form a new parliamentary majority and a government earlier this year.

Nastase, one of the co-presidents of ACUM along with Sandu, received more votes than Ceban in the elections last spring that were later invalidated by a court over minor irregularities. The balance of power tilting from ACUM to the PSRM was expected as the broad impression is that Dodon is increasingly imposing his views over the key decisions: reversing privatisation deals and prosecuting former civil servants allegedly involved in financial crimes.

Dodon criticised harshly the government on November 3, while the second round of the local elections was taking place Moldova. He accused Sandu of using the same “best practices” as her predecessor Vlad Plahotniuc, the controversial oligarch who did not served as prime minister but was the informal power behind the government.

“How is this government better than the previous one,” Dodon asked on a rhetorical note.

"I wish this parliamentary majority to continue its activity, we have supported this government ... [but] Things can change next week, because some red lines have been crossed during this election campaign by some partners, " he warned.

Asked what his alternative scenario would be, Dodon said that "there are two scenarios: the coalition may, or may not, continue to exist. “

However, he refused to say which party the PSRM could select to create a new majority coalition, and this would be difficult to achieve considering that the Socialists have only 36 MPs out of 101 MPs in total.