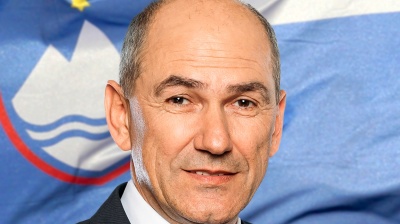 Slovenia’s Prime Minister Janez Jansa will take over the rotating EU presidency in July.
By Valentina Dimitrievska in Skopje April 14, 2021

Slovenia’s Prime Minister Janez Jansa, who will take over the rotating EU presidency in July, denied on April 12 Bosnian media reports that he had sent a non-paper to an EU official, in which he allegedly supports the division of Bosnia & Herzegovina.

Bosnian media reported that Janez Jansa handed over a document with guidelines on the "final disintegration of former Yugoslavia" to European Council President Charles Michel in February or March this year. Slovenian ambassador to Bosnia & Herzegovina Zorica Bukinac, meanwhile, was summoned by Bosnian authorities regarding the case.

“The last time I met him was last year. It would be difficult to physically hand over anything to him in February or March this year. Slovenia is seriously looking for solutions for the development of the region and the EU perspective of the Western Balkans, but such reports try to prevent this goal,” Jansa said in a tweet.

According to Politicki.ba portal, Jansa allegedly is in favor of a swap of territories, according to the plan circulated in the previous years by Serbian President Aleksandar Vucic and Kosovo’s former president Hashim Thaci.

Jansa allegedly informed the European Council that one of the priorities of the Slovenian EU presidency starting from July 1 this year, will be to redraw the borders in the former Yugoslavia.

Jansa also allegedly mentioned the possibility of the secession of the Serb Republic entity from Bosnia & Herzegovina, the unification of parts of Montenegro and North Macedonia [populated with ethnic Albanians] with Albania, and finally the annexation of the western part of Herzegovina to Croatia.

"Another possibility of Jansa's plan is to form three ethnic republics in Bosnia & Herzegovina. Serbia and Croatia would have close ties with their Bosnian entities, while the Bosniak republic would get a corridor to international waters, which would be protected by Nato," Politicki.ba wrote.

The portal noted that Jansa has advocated the concept of greater Serbia and greater Albania for a long time in the context of the final disintegration of former Yugoslavia under the EU and Nato auspices.

According to Politicki.ba, this is also supported by Hungary, Croatia and Poland, and even Austria and France are said to be in favor.

Slovenia’s 24ur reported on April 13 that there is a great possibility that the secret non-paper really exists, which was reportedly confirmed to the portal by unnamed sources, but probably was sent via diplomatic channels.

24ur also cited its sources that the document also deals with the return of former Prime Minister of North Macedonia Nikola Gruevski to the country, after he fled to Budapest in 2018 to avoid a prison sentence.

According to Bosnia’s Politicki.ba, Slovenian President Borut Pahor could be also in favor of a territorial trade proposal in the Balkans. Bosnian presidency member Zeljko Komsic confirmed to local media that Pahor told members of the presidency during his recent visit to Bosnia that there was growing talk in Europe that "the disintegration of Yugoslavia should be completed". Pahor also denied these claims.

Slovenia’s MEP Tanja Fajon commented in a tweet on April 13 that the irresponsible behavior of Jansa, in connection with his alleged idea of "completing the plan for peaceful disintegration of Yugoslavia", which includes the division of Bosnia & Herzegovina and Kosovo, could lead to a new war in the Balkans.

Fajon openly asked Jansa to explain what is in the document that Slovenia allegedly handed over to the President of the European Council.

Meanwhile, Slovenian news agency reported that the opposition Social Democrats (SD) have requested a session of the parliamentary Foreign Policy Committee to quiz PM Jansa and President Borut Pahor about media reports concerning the alleged non paper on the potential redrawing of borders in the Western Balkans.