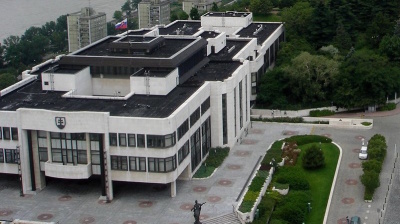 Committee chief Juraj Krupa is calling for a parliamentary meeting on November 9 and wants finance, defence and interior ministers to be present. / Juraj Kubica
By Albin Sybera November 8, 2022

Slovak customs police have been allowing export of IT and technology products to Russia, as well as to Belarus or Iran, which can be used for military purposes, according to Slovak daily DennikN. These include technology for manufacturing tyres, bearings or entire gears.

Chairman of the Parliamentary Committee for Defence and Security Juraj Krupa of now opposition SaS told Slovak media that it is “a mega-scandal” and that “Slovakia is a security hole”.

Krupa is calling for a parliamentary meeting on Wednesday November 9 and wants finance, defence and interior ministers to be present.

Goods which can be used for military purposes are subject to sanctions, and the Slovak daily reported that some of the exports which took place after February 24 include entire production unit for cargo tyres Kama. These can also be used by Russian armoured vehicles Tiger which carry anti-tank missile system Kornet-E or by cargo vehicles Ural which are used by the Russian army in Ukraine.

DennikN also points out that it is not clear from the list it possesses whether these goods come from Slovak manufacturers or from elsewhere in the EU. Other examples of exported goods include bearings for Russian company GK Jard from Yaroslav, which assembles gear components for Belarussian company MAZ. The military division of MAZ, MKZT, produces carriers for missile systems TOR, BUK and OSA or carriers for intercontinental ballistic missiles with nuclear warheads Topol-M.

Still more examples include exports of Austrian gears Rotax 912 to Iran, which are used by Iranian drones deployed by the Russian army in Ukraine against civilian targets. These are assembled by Slovak company Aerospool from Prievidza.

DennikN’s reporting stirred wide reactions, with the industry ministry saying it needs to verifiy the findings and the government office saying it will closely analyse the situation.

“Our goal is to possibly prevent indirect support of Russian federation’s aggressive war against Ukraine”, the Slovak office of government is quoted as responding to DennikN’s inquiry.

Customs authorities are part of the finance ministry, which is headed by Igor Matovic of OLaNO over whose role in the cabinet a months-long political crisis ensued, leaving the cabinet of premier Eduard Heger in a minority after SaS left the ruling coalition.

The finance ministry rejected it would knowingly assist the Russian war effort in Ukraine. The ministry pointed out that customs authorities together with finance ministry “were actively solving the refugee crisis and humanitarian aid on the border after the unprecedented attack of Ukraine by the military aggressor”.

In its initial response to DennikN,  customs authorities said they don’t make decisions over whether the “goods exported to Russia will or will not be used by the Russian army”, and that they don’t have “influence whether goods can end up in the Russian army”, adding that  the EU’s sanction lists are followed.

VISEGRAD BLOG: When Eastern European states speak out they are now listened to
Slovak former coalition allies agree on September 30 election
No tanks for Ukraine at Ramstein meeting