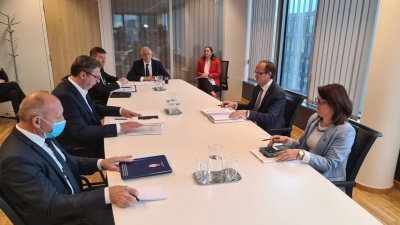 By Valentina Dimitrievska in Skopje September 2, 2020

Serbian and Kosovan officials are gearing up for the upcoming Washington meeting on September 4, as part of the process to find a lasting solution to their long-lasting dispute.

Belgrade and Pristina, which are engaged in the EU-mediated normalisation dialogue, were invited by the White House for a meeting that will be mainly focused on economic issues.

Originally, Serbian President Aleksandar Vucic and Kosovo’s President Hashim Thaci were scheduled to meet on June 27 in Washington, but the meeting was canceled after announcement that Thaci was indicted by The Hague-based Specialist Prosecutor’s Office for war crimes committed during the Kosovo independence war with Serbia. Then the meeting was scheduled for September 2 but was postponed by two days due to “scheduling reasons”.

“Serbia will offer a serious package for much better economic cooperation and infrastructure connection with its former province Kosovo and Metohija,” the director for the Serbian office for Kosovo, Marko Djuric said on September 1.

Djuric, who is a member of the Serbian delegation led by Vucic, pointed out that the package will be of “mutual economic benefit”.

Kosovo’s PM Avdullah Hoti, who will lead the Kosovan delegation, said in a tweet on September 1 that in Washington, the country will present major infrastructure and energy projects that will contribute to the development of Kosovo and its regional and European integration.

“Strategic decisions have always been taken in the White House that have led to the freedom, independence and Euro-Atlantic integration of the state of Kosovo. It will not be different this time,” Hoti tweeted.

The normalisation dialogue between Serbia and Kosovo, whose main mediator is the EU, was halted in 2018, but resumed in July this year after Kosovo lifted 100% import tariffs on Serbian goods.

Meanwhile, EU envoy for Serbia/Kosovo talks Miroslav Lajcak said that the final solution could be reached within months, media reported.

"The process of dialogue between Belgrade and Pristina will be more dynamic," Lajcak was cited by Serbian agency Tanjug, adding that the EU partners will meet in Brussels several times a month in order to reach a comprehensive solution as soon as possible.

Speaking on the sidelines of the Bled strategic forum, Lajcak said that there were still “very complicated issues to address”.

“Let’s see how much time we need but I am speaking about months, I am not speaking about years. Both parties are committed and are serious, respecting each other,” Lajcak said.

Kosovo unilaterally declared independence from Serbia in 2008, but it is still not recognised by Belgrade as a separate country. The proclamation of independence came one decade following the Kosovo war in 1998-1999 which ended with Nato attacks in Serbia. The independence war claimed more than 10,000 victims, making the two sides fervent enemies.

Kosovo wants the final agreement to include the recognition of Kosovo by Belgrade, but Serbian officials say that recognition is not an option.

North Macedonia, Albania and Serbia to invite Kosovo to join mini-Schengen on October 30
Serbian economy to outperform Southeast Europe this year
COMMENT: Why the Balkan region should be on investors’ radar screens