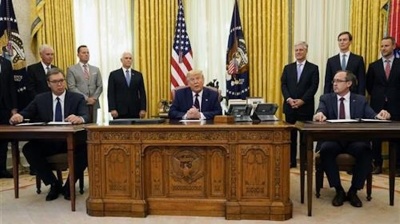 The economic deal was signed in the presence of US President Donald Trump.
By Valentina Dimitrievska in Skopje September 4, 2020

Serbia and Kosovo reached a “historic” agreement on normalisation of their economic relations on September 4 in Washington, White House officials announced.

The deal is of great importance as it is seen as another step towards full normalisation of the relations between the two sides. Belgrade and Pristina, which are engaged in an EU-mediated normalisation dialogue, were invited by the White House for a meeting that was mainly focused on economic issues. Their delegations were led by Serbian President Aleksandar Vucic and Kosovan Prime Minister Avdullah Hoti.

The economic deal was signed in the presence of US President Donald Trump.

"President Donald Trump has announced that Serbia and Kosovo have agreed to economic normalisation. Another historic agreement reached by the president, to make the world more peaceful and prosperous place,” President Trump's aide Judd Deere said in a tweet.

Following the ceremony, Vucic said that Serbia signed a bilateral deal with the US on economic cooperation with Pristina.

"We have signed a bilateral agreement with the US for economic cooperation with Pristina, not a trilateral one, in which Pristina is not mentioned as a subject of international law,” Vucic was cited by local media.

Serbian Finance Minister Sinisa Mali, who was part of the delegation to Washington, said that the agreement on the normalisation of economic relations with Pristina is “a huge success in the negotiations” and will contribute to faster integration and economic development of the entire region.

“We got the maximum we could, especially on issues that are important for the standard of living in the entire region of the Western Balkans,” Mali said, according to the government statement.

Among important projects that were agreed, Mali singled out the completion of the motorway from Nis to Pristina worth €1.1bn and the reconstruction of the Nis-Pristina railway line estimated at €1bn that will be financed by the US government.

Mali underlined that it is especially important that the US International Development Finance Corporation (DFC), with an annual budget of more than $60bn, agreed to open an office in Belgrade.

“This is of great importance because it will bring an even larger number of investors, give credibility to the entire process of economic development of our country and help improve our credit rating,” the minister said.

He added that one of the most important part of the agreement is that Kosovo agreed to be part of the so-called "mini-Schengen", which is an economic area so far agreed between Serbia, Albania and North Macedonia.

Meanwhile, Kosovan PM Hoti announced that the US president pledged that the projects agreed in Washington will be implemented within a year, Gazeta Express reported.

Hoti also announced important news for his country: Israel will recognise Kosovo and soon both countries will establish diplomatic relations.

“This is extraordinary news for the state of Kosovo. This support from the White House is essential to our journey towards the EU, the UN and other international organisations," Hoti said.

The Kosovan prime minister said he is convinced that the economic deal represents a big step towards reaching a final agreement with Belgrade.

"We see this agreement as a big step towards reaching a final agreement and mutual recognition with Serbia," Hoti said.

The delegations from Serbia and Kosovo started the meetings in Washington on September 3 mediated by White House national security advisor Robert O'Brien and the US president's envoy for the Serbia/Kosovo dialogue, Richard Grenell.

Originally, Vucic and Kosovo’s President Hashim Thaci were scheduled to meet on June 27 in Washington, but the meeting was canceled after the announcement that Thaci had been indicted by The Hague-based Specialist Prosecutor’s Office for war crimes committed during Kosovo’s independence war with Serbia. Then the meeting was scheduled for September 2 but was postponed by two days due to “scheduling reasons”.

Kosovo unilaterally declared independence from Serbia in 2008, but it is still not recognised by Belgrade as a separate country. The proclamation of independence came one decade after the Kosovo war in 1998-1999 which ended with Nato attacks in Serbia. The independence war claimed more than 10,000 victims, making the two sides fervent enemies.

Serbia and Kosovo will continue high level meetings with the mediation of the EU on September 7 when Vucic and Hoti are scheduled to meet again in Brussels. EU officials expect the final deal between the two sides to be reached within months.

Kosovo wants the final agreement to include the recognition of Kosovo by Belgrade, but Serbian officials say that recognition is not an option.

North Macedonia, Albania and Serbia to invite Kosovo to join mini-Schengen on October 30
Serbian economy to outperform Southeast Europe this year
COMMENT: Why the Balkan region should be on investors’ radar screens

Pro-EU opposition has its best-ever shot at winning the presidency in Moldova
1 day ago
Zelenskiy scrambles to defuse anti-corruption crisis of confidence in his government
20 hours ago
Lukashenko closes borders, sends top aides to western regions to face down faux NATO threat
1 day ago
Sofia streets empty as most of Bulgaria put in coronavirus “red zone”
1 day ago
Russian residential real estate developer Samolet Group IPOs at a price of RUB950 per share
2 days ago