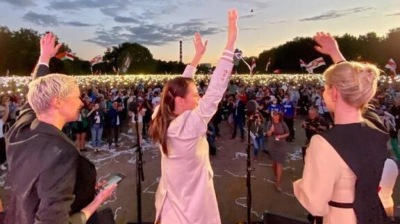 The poll was conducted by phone and has 8131 respondents. The Belarusian authorities have effectively made independent polling illegal and one of the problems with this election is there are no independent or trust worth indicators of the various candidates’ support.

These results are very different from the poll commissioned by the Belarusian state-owned broadcaster ONT that found Lukashenko enjoys 72% support and Tikhanovskaya only 7.5%.

Another online poll by the local news outlet tut.by that dodged the ban on polls by asking Belarusians to vote on the “most interesting films”  that had titles that clearly represent the various candidates found the Tikhanovskaya team enjoyed 61% verses Lukashenko’s 3%.

While Tikhanovskaya campaign has invigorated the country with some of the largest political rallies since independence, Lukashenko still commands a hard core of supporters that are grateful for the stability he brought and the neo-Soviet system that he runs.

In a related story Lukashenko said that his eldest son supports Tikhanovskaya and asked him not to run again as president in Sunday’s election.

Polls opened for early voting on August 3 but no independent elections observers have been allowed in to the polling stations. However, several NGOs have sent out unofficial monitors and reported that 2,056 voting violations on the first day of voting.

Observers are not allowed inside the polling stations and those that have tried have been arrested by police. NGOs are reporting dozens of arrests on August 4 of independent observers.

The NGOs report the official results for Lukashenko from polling stations are two to three times higher than their informal exit polls indicate.

Turkish lira finds another all-time low with Erdogan’s Caucasus adventurism no help at all
10 hours ago
Head of MS Estonia tragedy investigation says ship went down after collision with submarine
19 hours ago
Armenia accuses Turkey of sending in direct military support for Azerbaijan including F-16s
19 hours ago
Bucharest mayoral race win puts reformist USR in strong position ahead of general election
1 day ago
Belarusian police use stun grenades, pepper spray and fire shots to control Sunday's mass rallies
1 day ago