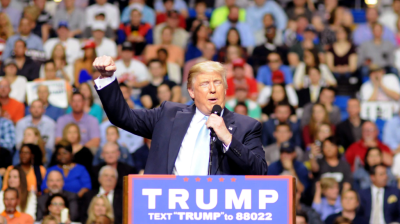 Trump claimed that Putin promised him Russia and Saudi Arabia would cut production by 10mn barrels, but his claim was immediately denied by the Kremlin.
By bne IntelliNews April 2, 2020

US President Donald Trump announced on April 2 that Russia and Saudi Arabia would be cutting their output, instead of continuing with a supply war that could result in hundreds of oil companies across the world going out of business. Moscow immediately denied that Russia had promised any such thing.

“Just spoke to my friend MBS (Crown Prince) of Saudi Arabia, who spoke with President Putin of Russia, & I expect & hope that they will be cutting back approximately 10 million barrels, and maybe substantially more which, if it happens, will be GREAT for the oil & gas industry,” Trump tweeted. “....Could be as high as 15 million barrels. Good [GREAT] news for everyone!” This has been refuted by the Kremlin, however, which even denies that Putin spoke with Saudi Crown Prince Mohammed bin Salman and that any talks had taken place.

“There was no conversation,” Kremlin spokesman Dmitry Peskov told reporters.

Traders were nevertheless encouraged by the news, with Brent surging 16% to $29.11 per barrel and West Texas Intermediate (WTI) leaping up 20% to $24.40 per barrel after Trump released his tweet.

Trump was characteristically lacking in clarity, failing to specify what timeframe the claimed 10-15mn barrel cut related to.

Russia produced 11.3mn barrels per day (bpd) of oil and condensate in March, according to energy ministry data, whereas Saudi Arabia ramped up its output to the 12mn bpd threshold on April 1 for the first time.

The lockdown consequences of the coronavirus (COVID-19) pandemic could wipe as much as 16mn bpd off global demand for fuel this month, Norwegian consultancy Rystad Energy estimated in a recent note. Reducing output in relation to anywhere near this amount of supply would be unthinkable for either Russia or Saudi Arabia.

Trump has strongly criticised efforts by Saudi Arabia, Russia and other members of the so-called OPEC+ to rebalance the oil market by restricting supply over the past three years. The suppliers’ pact collapsed in early March without a deal being reached to extend supply quotas. These quotas expired on April 1, enabling Russia and Saudi Arabia to pump as much oil as they pleased.

Trump has shifted position in recent weeks, because of the impact low oil prices have had on the US shale industry, which is heavily indebted and saddled with much higher breakeven costs than either Russia or Saudi Arabia.

America’s first big shale producer went bust this week putting pressure on Trump from the domestic oil and gas industry to do something.  Whiting Petroleum, one of the largest companies developing the Bakken shale formation in North Dakota, filed for protection against creditors, asking them to convert $2.2bn of debt into a 97% stake in the company.

It had become increasingly clear over the past few weeks that Trump’s administration, backed by the US oil lobby, would intervene to try and resolve the dispute between Moscow and Riyadh. Washington will be using diplomacy with Riyadh, which remains one of its strongest allies in the Middle East. With Russia, on the other hand, it is likely to be employing sanctions as leverage. Washington may be promising to scale back existing sanctions in return for Russia changing course, or threatening to impose new measures if Moscow fails to comply, or both.

It is unclear whether such a carrot or stick approach would work. But US shale drillers need oil prices to rise soon or else many will risk going under.

Some analysts believe that Russia withdrew from the OPEC+ deal in March specifically to cause the price of oil to collapse and so bankrupt US shale producers. With over $580bn in reserves Russia’s economy can function for several years with prices at $30. Russian oil companies are still in profit whereas most US shale producers are not.

Russia’s services PMI up slightly m/m in May, but contraction this year is significant

A third of Russians are ready to participate in a mass protest against falling living standards
STOLYPIN: Coronavirus and Kremlin stressing Russia’s elite social contract
Russia’s services PMI up slightly m/m in May, but contraction this year is significant