Russia’s Manufacturing PMI tumbles to 45.6 in November, worst result in a decade 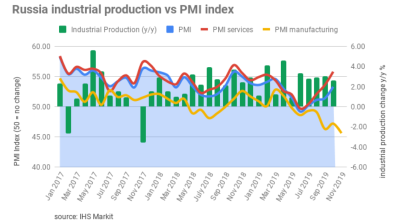 Russia’s IHS Markit Manufacturing Purchasing Managers’ Index tumbled to 45.6 in November, down from 47.2 in October – the worst performance across the Russian manufacturing sector for over a decade.

The strong deterioration in the health of the manufacturing sector has now entered its seventh month in a row.

“Russian manufacturing firms indicated a sharper deterioration in operating conditions in November, with the headline PMI figure dropping to the lowest since May 2009,” IHS Markit said in a note. “The overall contraction was driven by weaker demand conditions, with production and new orders falling at steeper rates. In turn, goods producers reduced their workforce numbers further and output expectations slumped to the weakest for two years.”

The manufacturing PMI has followed the fall in industrial production which was down from 3% in August and September to 2.8% in October and is likely to fall further when the November figure is released.

Markit’s respondents also reported a fall in confidence over the coming year in November. The level of optimism was the weakest for two years, with the reduction in positive sentiment generally attributed to challenging demand conditions.

The good news was inflationary pressures eased to historically low rates, with weak client demand and greater efforts to discount leading to only a fractional rise in output charges. Indeed, cost burdens rose at the slowest pace since February 2017, as weaker demand for inputs reportedly led some suppliers to offer discounts. At the same time, firms increased their factory gate charges only marginally amid efforts to remain competitive.

“Anecdotal evidence stated that the decrease in output was linked to a slump in client demand and a reduced customer base. The strong rate of decline quickened from that seen in October and was among the sharpest for over a decade,” IHS Markit reports. “Concurrently, new orders received by Russian manufacturers also took a tumble, with the rate of contraction accelerating to the steepest since March 2009. The fall in new business was commonly linked to hesitancy among clients to place orders. Foreign demand also dropped, and at a marked rate. A reduction in new order volumes from key export partners reportedly drove the decline.”

Due the slowdown manufacturers were cutting workforce numbers at the fastest pace since May as orders fell.

“Putin’s chef” follows through on threat to bankrupt Navalny, bailiffs seize his apartment

Major fighting erupts between Armenia and Azerbaijan over Nagorno-Karabakh
“Putin’s chef” follows through on threat to bankrupt Navalny, bailiffs seize his apartment
Swedish, Malaysian and French investors back Russian startups

The Board of the Central Bank of Russia has resolved to maintain the key interest rate flat at 4.25% in its policy meeting of September 18. The economy is doing well, but geopolitical tensions are rising