Russia's consumer credit driven retail running out of steam, while Ukraine has a boom ahead 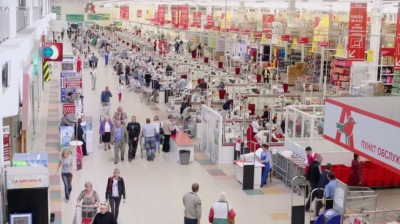 Russia's household debt levels are close to an all time high of 15.6% of GDP, while those in Ukraine have fallen to only 5%
By Ben Aris in Berlin November 10, 2019

The consumer debt profiles of Russia and Ukraine are very different. Russia’s household debt had risen to 15.5% of GDP as of the end of 2018 and is just shy of its all time high of 15.6% set in 2014. Ukraine’s household debt has been falling steadily from its all time high of 28.3% set in 2008 and is now around 5%, according to official figures, setting the economy up for a consumer credit driven retail boomin future.

There is a big difference too in the dollar values of the debt. Russia’s per capita household debt has increased by $336 in the last year to $1,954 per capita as of September this year, which is slightly more than the equivalent of two months salary.

Ukraine’s per capital household debt has also crept up in the last year, but only by a modest $30 to $204 per capita, which is slightly more than half a month’s salary.

In both countries these debts are still small enough that if a debtor gets into trouble and loses their job it is possible to pay the debts off by calling on friends and family. However, in Russia’s case the burden of debt is starting to reach a point where covering this level of debt is become more and more difficult.

A debate has been raging in Russia over the dangers of the rising consumer indebtedness. Consumer borrowing has been rising by 25% per year, but more recently as the Central Bank of Russia (CBR) starts to tighten the prudential rules surrounding retail loans the rate has fallen, dropping to 21% as of the third quarter. However, that compares to the growth of nominal incomes of 6.8% and of real income growth of 3.3% in September, so the debt pressure on consumers is slowly increasing.

Russia has almost used up its immediate capacity to fuel growth via retail loans and consumption. Economists say that in the last two quarters most of the growth has been driven by consumption, and that was largely paid for by credit as the propensity to save has also fallen. Russians, it seems, have got fed up with being poor and have started to borrow more to fund their previous standards of living.

The tightening screws on borrowing and real incomes in Russia have been on the decline for six years now and are weighing on retail turnover which slowed to 0.7% growth in September, down from 0.8% a month earlier.

In Ukraine the very low levels of household debt mean the economy has significant capacity to enjoy a consumer credit led retail boom similar to that which Russia enjoyed for most of the noughties that fuelled economic growth of 6-7% pa.

While Ukraine’s banks have not yet turned to the retail business as a main source of business, with real wages growing by 9.8% in September and retail turnover growth of 8.6% in the same month, clearly the conditions for a sustained boom are in place.

The banking sectors of both countries are in good shape as central banks in both countries have carried out very successful clean-up operations. However, with a significant non-performing loan (NPL) overhang in Ukraine – just under half of the aggregate loans on banks’ books are non-performing – Ukraine’s banks are being very cautious and focusing mostly on corporate loans

In Russia, while retain loans remain at half the volume of corporate loans, the high profitability of this business and the significant investments all banks have already long since made in building up a retail franchise means the volume of retail lending continues to rise quickly – especially in light of the fact that the corporate lending business has been largely stagnant for about four years. Following the collapse of oil prices in 2014, and the deep devaluation that followed, Russia’s companies have mainly been focused on deleveraging, not taking out new debt.

Corporate lending is not booming in Ukraine either, but there the problem is bankers complain there are so few high quality clients to lend to that also want to borrow. The fact that Ukraine’s monetary policy rate is a very high 15.5%, even after a full 100bp cut this month, also makes commercial debt unattractive. On this score Russia is in a better place as the CBR also dramatically cut rates by 50bp this month to 6.5%, and more cuts are expected, making commercial borrowing a lot more attractive, but owners are suffering from a crisis of confidence which has kept borrowing low and dividend payouts high.

Belarus is the “North Korea” of Europe, says US diplomat
COMMENT: Time to end Putin's impunity
bneGREEN: IEA calls for $1 trillion of annual investment into clean energy in developing economies

Once Armenia’s democratic hope, Nikol Pashinian is now calling for “vendettas” and to “replace his velvet mandate with a steel one.” And he’s not the only candidate using that kind of language.

Russia imports almost 100% of its high precisions machine tools as the collapse of the Soviet Union destroyed it’s once legendary machine building sector. Since then there have been several technological leaps forward but Russia is still behind

Findings from the Netherlands-based Group for Analyzing and Measuring Attitudes in Iran (GAMAAN) ahead of the Islamic Republic’s June 18 presidential election.

Poland's PKN Orlen bulks up to play in the big league

As part of the company’s PLN140bn investment drive by 2030, Orlen plans getting into offshore and onshore wind, solar energy, as well as energy storage.

Pilot journey inches forward plans to integrate economies of Central and South Asia. Whether the Taliban will stand in the way of the cargo route is still unclear.