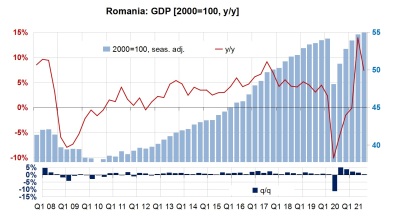 By Iulian Ernst in Bucharest December 8, 2021

Romania’s economic growth eased to 7.4% y/y in the third quarter of the year from 13.9% y/y in Q2, while the average annual growth rate for the January-September period was 7.1% y/y, the statistics office INS announced on December 7.

Compared to the November 14 flash estimate, this is a marginal upward revision from 7.2% y/y.

The figures came slightly below the consensus expectations and analysts already revised in November their full-year growth projections from above to below 7%. The annual high growth rates in Q3 still incorporate significant low base effects, which will, however, further diminish in Q4.

In contrast, the construction sector dragged down the economic performance of the quarter. The gross value added generated by the sector contracted by 6.1% y/y, making a 0.3pp negative contribution to the quarter’s GDP growth.

"The data is in line with expectations, I would say, it is not a major surprise. As we expected, if we exclude agriculture, the GDP in Q3 would have decreased (q/q) and this we have noticed since the publication of the flash estimate. We currently have two sectors that are doing poorly and two that are doing well. The ones that go bad are the industry and the constructions and the ones that go well are the agriculture and the services," said Ionut Dumitru, chief economist at Raiffeisen Bank Romania and former chairman of the Fiscal Council.

As regards the use of external resources (net imports), it remained above 5% of the total domestic consumption in Q3 at 5.3%, down from the record 6.1% in the second quarter this year but still generating a hardly sustainable deficit.

The transfer of resources under the Recovery and Resilience Facility should in principle have a positive impact on the country’s external balances — but they will be matched by a rise in domestic demand as eventually the deficit must be tackled by the substitution of imports and more value-added exports, which are the final goals of the facility.

Unemployment slightly rose in Czechia in July
1 hour ago
Moldova’s maize, sunflower crops decimated by drought
2 hours ago
North Macedonia’s annual inflation accelerates to 16% in July
16 hours ago
Romania’s central bank slows down monetary normalisation cycle with a 75bp hike
1 day ago
Hungary's industrial output picks up in June, but outlook mixed as economy set to slow down
1 day ago