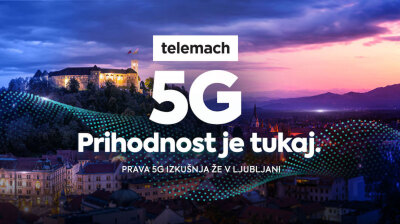 Telemach is launching its 5G network starting from June 15 initially making it available to users in the centre of Ljubljana and the BTC development.
By bne IntelliNews June 15, 2021

Telekom Slovenije said on June 15 it has upgraded its 5G network, launched in 2020, with an additional frequency spectrum of 3600 MHz, while its local rival Telemach announced it started the rollout of the fifth generation of mobile services.

"The 5G network was upgraded at several locations in Ljubljana. The upgrades of the 5G network in Bled and Brdo near Kranj will follow soon, with which Telekom Slovenije will also provide state-of-the-art communication services during the Slovenian Presidency of the Council of the EU," the telco said in a statement.

Meanwhile, Slovenia's Telemach, part of United Group, announced that it is launching its 5G network starting from June 15 initially making it available to users in the centre of Ljubljana and the commercial district BTC after it acquired additional frequencies.

“In line with Telemach’s strategy, we will then focus on other major Slovenian cities,” Telemach said.

“The transition to 5G technology will enable us to grow further and strengthen our position on the Slovenian market,” the company’s CEO Adrian Jezina said.

Jezina stressed that more than €100mn will be invested in 4G and 5G technology in the coming years.

The Iranian Foreign Ministry summoned the British ambassador to Tehran to complain that some protests—that have taken amid the huge ... more