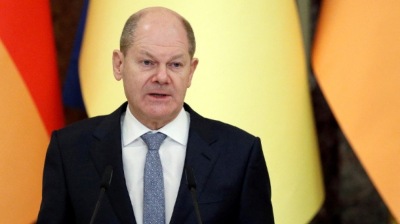 Speaking to a Western leader for the first time since September, Russian President Vladimir Putin told German Chancellor Olaf Scholz that Russian strikes on Ukraine’s energy infrastructure were “inevitable,” and rejected US President Joe Biden’s call for peace talks to resume on December 2.

The two leaders talked by phone in the first contact since Russia began a barrage of missiles strikes targeting Ukraine’s power plants and electricity infrastructure, which has plunged the country into darkness just as the first snows fall.

Putin slammed what he called the West's "destructive" policies in Ukraine and said Russian strikes were a response to "provocative" attacks from Kyiv, according to the Kremlin readout.

Moscow "had long refrained from precision missile strikes against certain targets on the territory of Ukraine," Putin told Scholz, the Moscow Times reports.

"But now such measures have become a forced and inevitable response to Kyiv's provocative attacks on Russia's civilian infrastructure," the Kremlin said, referring to an explosion that damaged the Kerch bridge bombing on October 8 linking Russia to Crimea in October.

During the hour-long call with Putin, Scholz "urged the Russian president to come as quickly as possible to a diplomatic solution, including the withdrawal of Russian troops," according to the German leader's spokesman Steffen Hebestreit.

As bne IntelliNews has reported, there is a “Ukraine fatigue” growing amongst the Western allies, according to the US Department of State, speaking to the Washington Post, that has recently led to an increasing number of calls for a resumption of peace talks.

"I'm prepared to speak with Mr. Putin if in fact there is an interest in him deciding he's looking for a way to end the war," Biden said during a press conference on December 1 with French President Emmanuel Macron.

"There's one way for this war to end – the rational way. Putin to pull out of Ukraine, number one. But it appears he's not," Biden said.

Presidential spokesman Dmitry Peskov told reporters the next day that the Kremlin is not prepared to withdraw its troops from Ukraine. "In fact, what President Biden said, he said that negotiations are possible only after Putin leaves Ukraine," Peskov told the Russian news agency RIA Novosti.

Macron emphasised during the same press conference that it is up to Kyiv to decide when the time has come for negotiations.

"We will never urge Ukrainians to make a compromise that is not acceptable to them," the French president said. "We have to let Ukrainians decide the moment and the conditions that they will negotiate."

Bankova has made it clear that it will not consider talks until Russia has left Ukraine’s territory, although after US prompting, Ukrainian President Volodymyr Zelenskiy has softened his line somewhat and suggested that he would be prepared to talk directly to Putin, something he ruled out a month earlier.

In the latest estimates from Kyiv, Mykhailo Podolyak, an adviser to Zelenskiy, said as many as 13,000 Ukrainian troops have died in the fighting. This estimate is much lower than the 100,000 dead European Commission President Ursula von der Leyen claimed in a video earlier this week, which caused a small scandal.

The EC president cited the number in a recording, but didn’t specify where the information had come from. Bankova objected to the estimate, saying casualty figures were a state secret. The EC rapidly pulled the video and re-released it with the offending section edited out.