Polish PPI inflation accelerates to 24.7% y/y in May 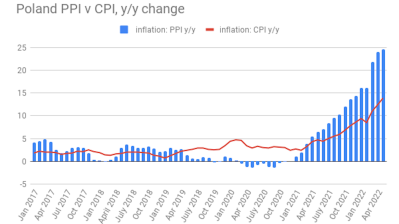 The index once again grew sharply due to expensive energy commodities and industrial metals, their prices driven up by the war in Ukraine. The PPI thus remains at one of the highest levels since the late 1990s and its growth is all but certain to be transmitted to headline inflation, giving the National Bank of Poland (NBP) only more rationale to keep raising interest rates.

“The increase in producer prices confirms that upward pressure on prices remains high, and recent readings of core inflation measures confirm that companies have no problem passing on higher costs to the prices of their finished goods,” ING said in a comment.

“This is likely to continue in the coming months, resulting in a further increase in core inflation. To bring inflation under control, the NBP will have to continue raising interest rates,” ING said.

The NBP rates are at 6% now, with the target level now moving towards 8.5%, some analysts suggest.

Prices in the most-weighted manufacturing segment grew 22.1% y/y in May, after expanding a revised 21.2% y/y the preceding month, the breakdown of the data showed.

Electricity, gas, and utility prices expanded 45.4% on the year in May after a revised expansion of 45.5% y/y the preceding month. The water supply segment saw prices ease 0.6pp to the revised April figure, to come in at 7% y/y.

The index dropped 0.3% m/m in mining and quarrying and 1.8% m/m while remaining unchanged in water supply. In manufacturing, the PPI added 1.5% m/m. In the utility segment, it inched up 0.6% m/m in.

Poland ups the ante in feud with Brussels over judiciary reforms

Romania’s public debt reached €124.3bn at the end of May after the government raised €1.75bn in the month with its third series of Eurobonds this year.

Romania’s public debt hits 50% of GDP at end-May
17 hours ago
Hungary's automotive industry continues to rebound in June
1 day ago
Russian GDP contracted by 4% y/y in the second quarter of 2022
1 day ago
Serbia’s annual inflation accelerates further to 12.8% in July
2 days ago
Poland’s CPI growth rate picks up just 0.1pp to 15.6% y/y in July
4 days ago