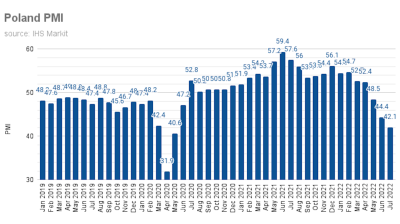 Poland's Purchasing Managers' Index (PMI) dropped 2.3 points to 42.1 in July (chart), the third time in a row when the index fell below the 50-point mark separating contraction from growth, the economic intelligence company S&P Global said on August 1.

Recession worries, high inflation and ongoing geopolitical turbulence – Russia’s war against Ukraine and its knock-on effects such as the precipitous rises in energy prices – led to sharp falls in output and new orders, S&P Global said. That made companies cut employment for a second month in succession in July while confidence about the future sank to the lowest point since April 2020, the worst of the coronavirus pandemic in Poland.

“We should be under no illusions of the scale and speed that the downturn is occurring: the index numbers we're seeing for both output and new orders have only been beaten to the downside during periods of extreme stress (the global financial crisis and the pandemic),” Paul Smith, Economics Director at S&P Global Market Intelligence, said in a statement.

Polish analysts say that the July reading of the index could be overstating the scale of problems that the manufacturing sector is facing, as large exporters may have skewed the result to an extent. Still, notes bank PKO BP, the July PMI provides a clear signal as to where Poland’s manufacturing is headed and could bring forward the end of monetary tightening by the National Bank of Poland (NBP).

“We maintain our forecast that the NBP will end the tightening cycle with one more interest rate hike of 25bp-50bp to 6.75%-7% in September,” PKO BP said.

The easing of NBP policy is also made more likely by the easing of price pressures in Poland’s manufacturing to the lowest rate in 20 months, according to S&P Global data.

Polish industrial production increased 10.4% y/y in June, a slowdown in growth from May, which stood at 15% y/y, Poland’s statistical office GUS said in late July.

“We are facing a technical recession in the second half of the year and its depth will be determined by a number of factors,” ING analysts said.

Thanks to a very strong first quarter and a decent second quarter, Poland is going to see its GDP expand around 5% in 2022 anyway before expansion eases to roughly 3% in 2023, with caveats attached to the outcome – if any – of the war in Ukraine and the actual effects of the NBP's aggressive monetary tightening campaign.