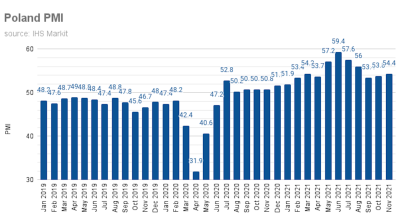 The index remains clearly above the 50-point line separating contraction from growth. October was the 17th straight month of the survey indicating expansion in the industrial sector despite shortages in supply and staff, IHS Markit said.

“The Polish manufacturing sector expanded at a firmer rate during November, supported by stronger gains in both output and new orders. Staffing shortages and challenges in the recruitment of new staff led to a marginal reduction in employment, whilst confidence about the future softened as supply constraints persisted and price pressures intensified,” IHS Markit said.

Output growth was primarily limited to the domestic market, however, as new export work registered a net fall for the third month running.

Cost inflation remains an issue. “Average input prices rose sharply and at the greatest pace since July, with firms indicating that prices for a wide range of goods and services – such as commodities, metals, fuel, and utilities – were rising,” according to IHS Markit.

That will likely be reflected in the November reading of Poland’s PPI, due later this month. The PPI has been accelerating since January, fuelling headline inflation. In October, Polish factory gate prices expanded 11.8% y/y, a 24-year high, compared to a gain of 10.2% y/y the preceding month.

Purchasing growth was registered for a twelfth month in succession, and firms signalled that much of their current buying activity was designed to bolster stock. In effect, the net rise in inventories of inputs and semi-manufactured goods was the sharpest recorded by the survey in over 23 years of data collection.

Meanwhile, the knock-on impact of staff shortages in November was an accumulation of backlogs of work for a fourteenth successive month, though growth was the weakest seen since the start of the year, IHS Markit said.

That said, the October reading was well above the consensus line of just 5.4% y/y. October was the 17th straight month of growth in industrial output, even if the expansion turned out very feeble at times.

Poland's GDP is currently expected to grow over 5% in 2021 on the back of reinvigorated household consumption, exports, and – to a smaller extent – investment.