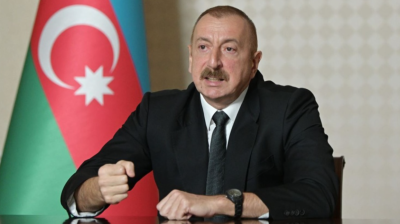 Aliyev told Azerbaijan's public broadcaster that "We will be implementing the Zangezur Corridor, whether Armenia wants it or not.”
By bne IntelIiNews April 21, 2021

However, Armenian political analyst Eric Hacopian told the news service that he believed the remarks to Azerbaijani Public TV were not only meant for Armenia, but for a domestic audience as well. He added that there were no credible military threats to “back up his rhetoric”, which, he added, was reminiscent of “Saddam Hussein”.

A commitment to negotiating for a deal that could lead to such a corridor, running parallel to the Iranian border and patrolled by Russian border service guards, was part of the tripartite ceasefire agreement brokered by Moscow that brought an end to last year’s six-week autumn war over the Nagorno-Karabakh enclave fought by Azerbaijan and Armenia. The agreement saw Azerbaijan make substantial territorial gains but there are signs of growing frustrations in Baku at the slow delivery of other aspects of the deal, such as the corridor.

“The Azerbaijani people are returning to the occupied Zangezur,” he said.

Responding to Aliyev, Armenian Foreign Ministry spokesperson Anna Naghdalyan condemned his comments, saying that they “do serious harm to regional peace and stability” and “reveal the false nature of Azerbaijan’s recent peace statements”.

“Armenia will take all necessary measures to protect its sovereignty and territorial integrity,” she added.

The Human Rights Defender of Armenia released a statement, describing the remarks as reflective of the “fascist policy”of Aliyev.

Armenian Prime Minister Nikol Pashinian accused Aliyev of trying to “abort the process” of the tripartite peace declaration and of stepping back from his agreements.

Hacopian added in his comments to OC Media that with respect to the possibility of unblocking the transport links between the countries, “as a matter of policy, anything that opens up the railway lines to Iran and Russia via Azerbaijani territory is good for Armenia”. But, he added, “there are limits, and this kind of Saddamesque language could lead to those limits coming into play”.