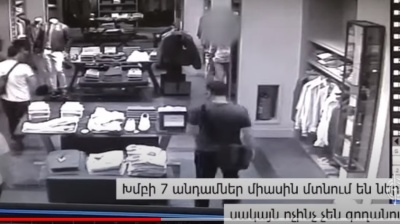 An organised criminal ring of “masked marauders” that has been targeting Yerevan shopping malls for several years “have thrown a much wider net”, adding to their targets for brazen thieving, Armenian investigative news site Hetq has reported.

In a September 13 article entitled “Yerevan’s shopping mall bandits: Many go free to rob again”, the media outlet described how things had grown much worse since it published an earlier article, in August, which described how the gang was hitting high-end Inditex clothing stores in the Armenian capital.

The video below shows thieves hitting the Massimo Dutti store in Yerevan.


Hetq reported: “The thieves have been especially active in the city’s Yerevan Mall and the Dalma Gardens Mall.

“The ring, composed of men and women of all ages, mostly hit clothing stores, but are known to periodically target consumer electronics outlets.

“The thieves both attack as a group or individually. They also visit their potential targets in advance, warning store security guards to stand aside when they return. The group oftentimes turns the store upside down after issuing the warning.”

The thieves are reportedly bypassing store alarms by using special silencer devices, while a security guard was cited as saying that “police inaction has only bolstered the thieves’ brazenness”.