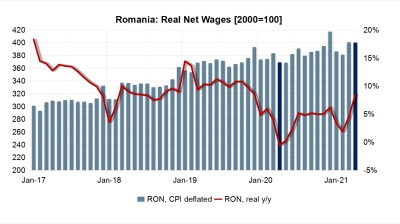 Romania’s average net wages posted an impressive 11.9% annual advance (+8.4% year on year in real terms), to RON3,561 (or €724) in April – but the outstanding performance is largely due to low base effects, while the wages will rise at a much more moderate pace this year compared to the pre-crisis period, the state statistics committee reported on June 11.

The broader picture shows the wages halted in April and the growth will resume at a more moderate pace compared to the pre-crisis period.

Rising inflation and a weaker currency will predictably erode the nominal advance of the nominal wages in the private sector and the wages in the public sector were already frozen by the government as part of the fiscal consolidation framework. However, the relaxation across European countries will result in the evaporation of a part of the local workforce, putting upward pressures again on wages and labour costs.

It is notable to see the wages have increased immediately after the crisis, in the second half of last year – and this has contributed to the overall recovery, and at the same time to the record external deficits in the trade with goods seen in the first quarter of 2021.