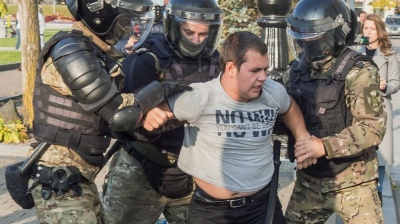 OMON were used to break up protests in Khabarovsk for the first time. Some 25 people were detained.
By Ben Aris in Berlin October 11, 2020

OMON riot police were used to break up protests in Russia’s Far East city of Khabarovsk on October 10, the first time police have been used, as the protest went into its 92nd day.

Twenty-five people were arrested as police brutally beat members of what had been a peaceful protest of mainly middle-aged and older residents of the city.

“The authorities in Russia are simply scoundrels. When half of the people in Khabarovsk took to the streets, the police hid like cockroaches. They waited three months, the number of people decreased, they grew bolder, went out and began to beat people for no reason,” anti-corruption blogger and opposition activist Alexei Navalny said on his Instagram channel.

The OMON arrived after demonstrators began attempting to erect tents in a central part of the city. Tents are closely associated with Ukraine’s Maidan demonstration, as a tent city quickly filled the centre of Kyiv and drew in ever larger crowds of supporters.

The protests have been a weekly occurrence for over three months following the arrest of the popular governor Sergei Furgal, who is accused of multiple murders. Furgal denies the charges against him, which he says are politically motivated. Furgal is a member of the nationalist LDPR party that is headed by firebrand Vladimir Zhirinovsky and he won a surprise victory in the 2018 elections against the local representative of the ruling United Russia Party.

Despite his shady business past Furgal made himself popular by running the region well and improving public services. After his arrest tens of thousands of people took the streets calling for his return and demanding Russian President Vladimir Putin resign.

The authorities were initially hesitant to use local police to break up the demonstration as their loyalties were questioned. Police from other regions were bussed in to monitor the crowd, but despite being unsanctioned, the protests were tolerated by the authorities and allowed to proceed unmolested.

In the last month the size of the crowds has reduced and the supporters of the Communist Party of Russia are predominant, carrying Soviet-era flags and slogans as well as singing Soviet-era songs, according to reports.

The size and the longevity of the protests in Khabarovsk had surprised observers, as did the Kremlin’s obvious helplessness to prevent them. A replacement governor was sent to the city, also from the LDPR, but he was rejected out of hand by the residents.

The demonstrations have been closely watched for signs that they might spread to other Russian regions. And they come at a time when Belarus has also erupted into mass protests, a story the Russian population is following closely. Indeed, the red and white flags of Belarus have appeared amongst the protesters in Khabarovsk.

However, so far there is no sign of other regions protesting in support of Khabarovsk, and the Kremlin has been very careful not to inflame the situation. The decision to send in the OMON this weekend is clearly a calculation by the Kremlin that the protests are losing their momentum and have lost the support of the wider population. The risk the Kremlin runs is in the light of excessive police brutality it runs the risk of re-igniting the protests and fuelling even more passionate anti-Kremlin sentiments.