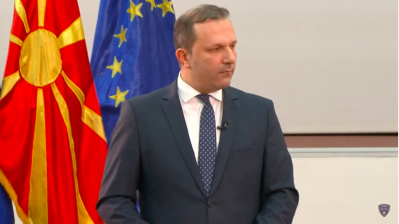 The mysterious disappearance of North Macedonia’s ex-secret police chief Saso Mijalkov was resolved after he unexpectedly showed up in the afternoon of February 23 to hear the decision on his house arrest from a Skopje court.

Mijalkov appeared to have vanished on February 21, a few days ahead of the final verdict in a high-profile illegal surveillance trial that is expected to see him sentenced to prison.

His disappearance shook all North Macedonia’s institutions, courts, prosecutors, the public and politicians in the last two days as real drama was created after the authorities lost track of him.

After he heard the court decision, Mijalkov was put under house arrest and escorted home by police.

55-year-old Mijalkov, a powerful businessman, was accused in the Target-Fortress case, which concerns the illegal surveillance of communications between 2008 and 2015 and the destruction of surveillance equipment used for illicit wiretapping.

Shortly after Interior Minister Oliver Spasovski held news conference at around 2.30 pm local time, Mijalkov unexpectedly appeared in front of the court in Skopje, where the prosecutor’s office is located, and where a crew from TV24 was waiting for him.

Exclusively for TV24, Mijalkov said he did not flee, but isolated himself fearing that he had coronavirus symptoms.

“Yesterday I was really sick, with temperature of 40 degrees and when this morning I found out about what’s happening I decided to come here,” Mijalkov said.

"I want to apologise to the public for all the troubles that I caused and I want to repeat the promise that I will never flee the country,” Mijalkov said.

He also apologised to the government, PM Zoran Zaev, ministers and justice institutions.

Was this just a little prank by Mijalkov or did something else happen behind the scenes?

Asked by journalists if Mijalkov was playing jokes with the state, Zaev said that it’s not the case, but that institutions forced him to show up, not to hide or try to run away.

"The institutions did not find him, but they put pressure on his relatives and property. Then he reported himself to the Prosecutor's Office, after his lawyers appeared there first," said Zaev.

Spasovski said earlier during the news conference that the authorities believed that Mijalkov had not run away and was still in the country.

Prosecutor Vilma Ruskoska said at a news conference that prosecutors will consider the request to put Mijalkov in prison detention.

Other prosecutors not related to the case, think that house arrest is an inappropriate measure. “In my 15 years of practicing criminal law, I do not know of a case of a fugitive being sentenced to any measure other than prison detention. I have once seen a fugitive placed under house arrest, but that was in a movie,” a prosecutor from Ohrid Vojo Dimovski was cited by media.

Twitter was full of funny comments about the drama surrounding Mijalkov’s disappearance.

“I expect a selfie with a cousin from Hungary,” one twitterer joked. Mijalkov is a first cousin of former PM Nikola Gruevski, who fled the country in 2018 to avoid serving a jail term for the illicit purchase of a luxury Mercedes. Gruevski was later granted asylum in the Hungarian capital Budapest.

“I was in Vranje [a town in southern Serbia] to get a vaccine, and to do a little shopping in Lidl. Do not panic, I’ll be back this evening. Saso,” said another tweet.

The most embarrassed in the drama seems to be the opposition VMRO-DPMNE — Mijalkov’s former party — which accused the authorities of being responsible for Mijalkov’s disappearance and urged the government and PM to resign quickly. Party leader Mickoski said earlier that Zaev had helped Mijalkov to run away.

Mijalkov was expelled from VMRO-DPMNE in 2018 as he supported the Prespa name deal which Zaev’s government signed with Greece that changed the country’s name to North Macedonia.

VMRO-DPMNE also organised an evening protest, which was later cancelled after Mijalkov appeared in public.

The verdict on Mijalkov is due on February 26.

Mijalkov is also indicted in several other cases. These include Trezor (Vault) concerning the misuse of state funds by secret police officials to buy video monitoring equipment, Tortura (Torture) for ordering political opponent Ljube Boskoski to be tortured during his arrest, and election fraud case Titanik 2 (Titanic 2).