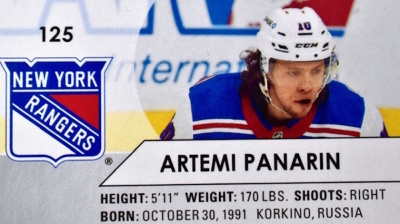 The North-American-based National Hockey League (NHL), the world’s most popular ice hockey competition, is opening its 106th season in Prague on October 7 amid criticism for allowing Russian hockey players to take part.

Czech legend Dominik Hasek, one of the best keepers ever to play the game, has called on the Czech foreign ministry to prevent Russian players playing in the NHL opener between San Jose Sharks and Nashville Predators by denying them entry to the country.

“Thanks to the Russian lads on the ice the fans will also be watching a commercial for the Russian war and killing in Ukraine. That is a fact. A sad fact,” Hasek was quoted as saying by Czech media.

Czech Minister of Foreign Affairs Jan Lipavsky, who  supports a complete ban of Schengen visas for Russian citizens, had said he was ready to apply this policy to Russian NHL players as well, but any action now looks too late.

“Russian players should not be issued visas to Schengen”, he told the Czech Press Agency in September after he was asked whether this applies to the NHL season opener as well. However, players from both San Jose and Nashville were already holders of Schengen visas by other countries that the Czech side had no power to revoke.

Earlier this year, the International Ice Hockey Federation (IIHF) banned Russia and Belarus from taking part in the World Championships in 2022 and 2023. Moreover, Finland, Latvia and other national hockey federations have banned their own players from playing for their national teams if they have signed contracts in the Russian state-backed KHL league, which is home to a number of teams owned or managed by Russian oligarchs.

The Czech ice hockey federation also banned Czech players who signed contracts for the KHL after the Russian invasion of Ukraine from playing for the national team. This was most closely watched in the case of Dimitry Yashkin, son of Russian player Alexei who played in the Czech top league in the 1990’s and 2000s and later made Czechia his home.

This summer Yashkin signed with SKA St. Petersburg, one of KHL’s most powerful teams, which is owned by Gazprom Export and coached by Roman Rotenberg, son of UK-sanctioned Boris Rotenberg, owner of SGM, a major gas pipelines construction company. Moreover, Yashkin was made captain of SKA on August 21, that is on the anniversary day of the Soviet-led invasion of Czechoslovakia.

Hasek said he had no understanding of Yashkin’s contract with SKA. “The work of a Czech citizen in the Russian federation amounts to support of the Russian regime, the war in Ukraine, that is a danger for our country and its citizens”, he wrote on Twitter. He said he regretted that Czech legislators have not passed a law forbidding Czech citizens from working in Russia in response to Russia’s war in Ukraine.

The Russian league is enthusiastically supported by Russian dictator Vladimir Putin, who likes to take to the ice himself.   Putin learnt to skate only late in life but there are couple of videos of him scoring goals in exhibition games with former Soviet-era and NHL ice hockey stars such as Vyacheslav Fetisov or Igor Larionov, both Stanley Cup champions.

During much of Putin’s era, Fetisov, like another Soviet-era ice hockey legend Vladislav Tretiak, held legislative posts as well as a number of influential posts in sports agencies. Tretiak carried the torch at the 2014 Winter Olympic games in Sochi,  which was likely the most corrupt Winter Olympics on record both for its investment expenses – Transparency International estimated some 50% or some $15bn were added to construction costs for kickbacks – and for the massive state-sponsored doping of Russian athletes.

bneGREEN: CEE countries need to invest in more solar and wind to break their Russia energy dependence
NEMETHY: How the Battle for Ukraine may change Europe
COMMENT: The new Cold War will be different, and not only because of China