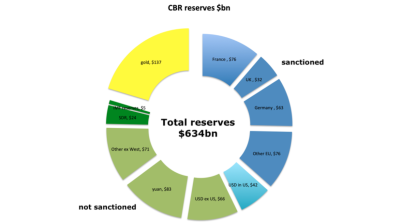 Russia has over two tonnes of gold worth $136bn, but new secondary sanctions by the US are attempting to make it very difficult for Russia to sell its bullion. / bne IntelliNews
By Ben Aris in Berlin March 26, 2022

The US Treasury Department (USTD) confirmed on March 24 that Russia’s $136bn worth of gold reserves are subject to secondary sanctions as the West tries to close down loopholes to its extreme sanction regime.

However, another approximately $380bn of reserve funds are outside the reach of the West and still theoretically at the disposal of the regulator. Additional SWIFT sanctions were also imposed that make it very difficult for Russia to transfer money abroad and are causing problems for it to mobilise the funds that remain under its control.

The CBR held 16.4% of its total funds in US dollars, but only 6.6% of the total was held in cash inside the US. The remaining 10.4% is in dollars cash, but outside the US, and presumably a large share of that is in dollars cash held in Russia itself.

In addition, there is another $24bn held as SDRs, the currency of the IMF, and an additional $5bn held as cash with the IMF as part of its cash reserves. Neither of these pools of money have been sanctioned.

On top of that Russia holds some $136bn, or 21.7% of its total reserves, according to the last available data, in physical gold (74mn troy ounces), almost all of which is in Russia. Russia is a major producer of gold and the CBR has been building up its reserves over the last decade and has the right to make gold producers sell part or all their production to the central bank, after which they are free to sell any surplus on the international markets. 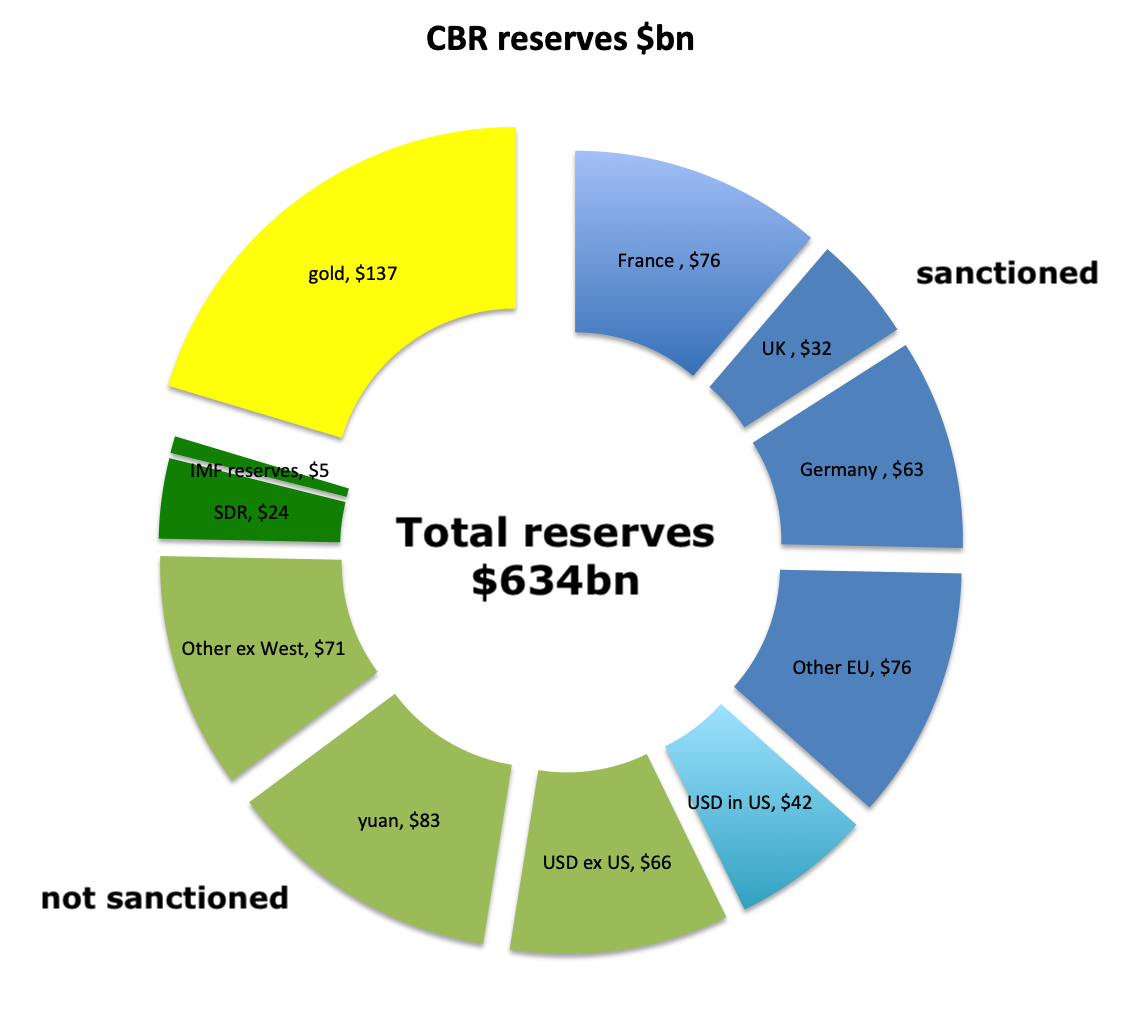 As this gold is outside the reach of the West and physically in Russia it is beyond the reach of sanctions. However, the new rules are an attempt to prevent Russia from selling this gold on the deep and liquid international bullion markets.

“This guidance makes clear that any transaction involving gold related to the Central Bank of the Russian Federation is covered by existing sanctions,” the USTD statement reads.

US lawmakers are attempting to block gold transactions done alongside the Group of Seven and European Union allies, by threatening secondary sanctions on an institution that enters into a gold deal with Russia.

Specifically, gold dealers, distributors, wholesalers, buyers and financial institutions are now banned from buying, selling or facilitating gold-related transactions involving Russia and any party that appears on a sanctions list.

Although the USTD ban applies only to US residents or companies, as almost all major banks in the world have correspondent representation in the US, the ban is in effect global as any trader or bank that enters into a gold deal with the CBR, as wherever it is in the world, its US-based branch is then exposed to secondary sanctions in the US.

“It is another way to close sanctions loopholes, and increase economic pressure on Russian entities,” Rachel Ziemba, an adjunct senior fellow at the Center for a New American Security, told The Associated Press news agency.

After being removed from the SWIFT bank messaging system that enables international money transfers, the CBR said it would resume the purchases of gold on the domestic precious metals market, which it suspended last summer.

Holding gold should give the CBR access to foreign exchange through a variety of transactions, such as swapping gold for foreign exchange that is not subject to current sanctions like the rupee or the yuan. Another way would be to sell the bullion – both physically and digitally – through gold markets and dealers. The gold could also be used to directly purchase goods and services from willing sellers.

Russia maintains good relations with India, which abstained from the recent UN Security Council (UNSC) vote on February 26 and a follow-up vote by the UN General Assembly vote on March 3 to condemn Russia’s attack on Ukraine on February 24.

Nevertheless, even if Russia’s gold is taken off the market the CBR still has some $244bn of reserves at its disposal, which is equivalent to six and half months of import cover – more than twice the minimum economists believe is needed to ensure the stability of the national currency and a comfortable cushion to absorb many of the shocks from the current round of sanctions.

Poland basks in the glory of being Europe’s chief ally of Kyiv
15 hours ago
Russia forges ahead with gas ambitions in Uzbekistan, Kazakhstan
1 day ago
Mongolian government accused of rushing through veiled law that dismantles freedom of speech
3 days ago
Russia is preparing for spring mass mobilisation
3 days ago
Davos climate change debates hindered by lack of Russian, Chinese delegates
3 days ago