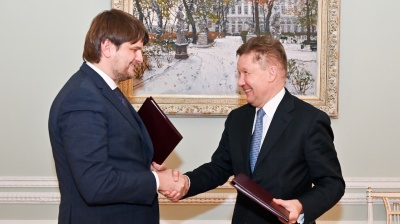 Moldova’s Deputy Prime Minister Andrei Spinu and the head of Moldovan gas company Moldovagaz Vadim Cheban agreed with representatives of Russia’s Gazprom to extend the natural gas delivery contract for five years, the Ministry of Infrastructure announced on October 29. The contract will come into force on November 1.

Moldova fully relies on imports, mostly natural gas imports, for its energy. The long-term contract with Gazprom expired at the end of September, leaving the country vulnerable at a time when energy prices have surged across the whole of Europe.

The deal was agreed just days before the end of October, after which supplies of gas to Moldova had been highly uncertain, with expectations they would best continue at reduced capacity and high prices. As the end of the month approached, the Moldovan government declared a state of emergency and sought gas supplies from alternative sources.

Under the agreement, the contract between Gazprom and Moldovagaz, which expired at the end of September, will be extended for five years using the price calculation formula proposed by the Moldovan side.

“The parties agreed on the price calculation formula, on conducting an audit on the debt owed by Moldovagaz to Gazprom and on further negotiating the payment schedule,” the ministry said.

The formula has not officially been made public, but sources familiar with the negotiations quoted by Tass disclosed that the price formula is defined based on two seasons: the cold season and the warm season. During the cold season (first and fourth quarters), the price is 70% linked to the oil price and 30% to the market price of natural gas. During the warm season (second and third quarters) the weights are inverted. The formula may lead to a two-fold increase in prices compared to the old formula (used under the contract that expired at the end of September), up to $500-600 per 1,000 cubic metres, the source said.

Spinu, quoted by Mold-Street.com, said that the price for the month of November would be around $450 per 1,000 cubic metres, and the price is expected to decrease as oil prices fall. Spinu made clear that the contract has no political clause, or clauses related to the Russia-backed separatist region of Transnistria. But the content of the contract will be disclosed only with the approval of both parties (Moldovagaz and Gazprom), he added.

Former deputy speaker of the parliament and former deputy president of the Dignity and Truth Platform (PPDA), Alexandr Slusari, quoted by Deschide.md, asked for full disclosure of the contract, including the price formula. He particularly insisted on the disclosure of any possible restrictive clauses such as mandatory monthly amounts and denial of investments in storage capacities.

Moldovan foreign policy expert Dionis Cenusa commented that the signing of the contract “is obviously good news, because a series of negative consequences difficult to estimate has been avoided. A few things deserve attention, though. Both the government in Chisinau and Russia avoided the negative scenarios that could have been caused by stopping gas supplies. Minister Spinu said that the price formula is the one proposed by the Moldovan side. However, according to the Russian sources, the price could be proportional with the price of oil and natural gas over a nine-month rolling period. The price will also be reviewed quarterly. That is, if it turns out that this is the formula, the price will not be the same [will be higher] compared to the one resulted from the old formula that was only based on the price of the oil.”

Before striking a new deal with the Moldovan side, Gazprom had insisted on the repayment of Moldova’s debt. As regards Gazprom’s claim on Moldovagaz, the Russian company estimates it at $709mn out of which the principal is $433mn. This doesn’t include debts run up by Transnistria.

On October 26, Moldovagaz said that a report on the debt would be ready “by the end of the week” (namely on October 31).

A thorough audit might be needed not only on the debt owed by Moldovagaz to Gazprom, but also on the financial corrections Moldovagaz is entitled to and on the claims that Moldovagaz may hold against Moldovan companies such as Termoelectrica (formerly Termocom).

Other details such as the "take or pay" clauses are important in the context of the country needing to diversify its energy mix. Ironically, below-market prices combined with the free gas delivered to Transnistria (which sells electricity to Moldova proper) would squeeze out investors and complicate the development of a functioning energy markets.

Gazprom said in a press release that the contract on gas supplies to Moldova was extended “on mutually beneficial terms”. Sources familiar with the negotiations claimed that Gazprom officials spoke out against the liberalisation of the energy markets in Moldova, but the authorities in Chisinau firmly confirmed that such clauses are not negotiable. Moldovagaz is supposed to unbundle and offer access to its distribution network to independent suppliers. This is essential for the market functioning and for the recently commissioned Ungheni-Chisinau pipeline, which could bring natural gas to Moldova's industrialised regions from other sources.

Headline inflation hits 13.9% y/y and is still far from peak in Moldova