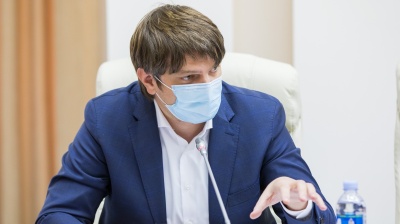 Deputy Prime Minister Andrei Spinu says it is unclear whether Russia’s Gazprom will continue delivering gas after May 1. / gov.md
By Iulian Ernst in Bucharest April 11, 2022

Moldova is looking at other options to buy natural gas as it is unclear whether Russia’s Gazprom will continue delivering gas after May 1, Deputy Prime Minister Andrei Spinu announced on April 8.

The historic debt between Moldovagaz and Gazprom was supposed to be settled by that date, as agreed last November under a memorandum sealed along with the long-term natural gas contract. However, the two sides have not yet reached agreement on an independent audit, and Gazprom has not answered the inquiry sent by Moldova about whether it plans to terminate gas supplies as of May 1.

Moldova has asked Gazprom to say whether it agrees to defer the deadline for an independent audit on the debt, deputy Spinu said.

“Unfortunately, we have no answer and we are preparing for plan B," Spinu told Jurnal TV station’s Cabinetul din umbră show.

Spinu said that as the actions of the Russian gas company are “completely unpredictable”, the government is seriously preparing to purchase gas from alternative sources.

Moldova can technically bring in natural gas from Romania, except for the southern part of the country that needs supplementary connections with Ungheni-Chisinau pipeline, and the country's power grid has already been linked to the ENTSO-E grid. But the price paid for electricity and gas purchased from the spot market would be very high and notably the separatist Transnistria region would lose its economic viability if left without cheap (effectively free) Russian natural gas.

Spinu said that if Moldova is put in a position where it has to buy gas and electricity at the market price, “then this will be the price of the independence of the Republic of Moldova”.

"Everyone knows that the market price is high, but if we end up paying for electricity at the market price, and for gas, this will be the price of the true independence of the Republic of Moldova. Especially after seeing the terror in Bucha, Irpin and other Ukrainian cities. It will be difficult, we will have to cut other expenditures, we will have to allocate more for new compensations, and we will have to give up certain things in order to get through this energy crisis. But, probably, it's about the time,” Spinu said.