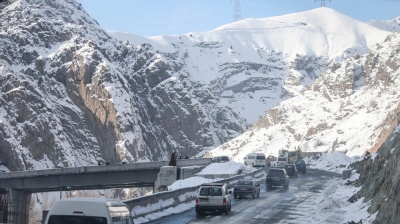 Iran’s Minister for Roads and Urban Development Mohammad Eslami has rebutted comments from an official that the Tehran-North motorway will be inaugurated in two weeks’ time, according to YJC.

Head of the Planning and Budget Organisation Mohammad-Baqer Nobakht said last week that the president was set to open Section-1 of the motorway which cuts through several mountains sections to form a route between the capital and the Caspian Sea province of Mazandaran, on February 10. But the minister said the opening would occur at a later date as the road would not be ready in time.

The Tehran-North highway has been on the cards since before the 1979 Islamic Revolution. The last Shah of Iran Mohammad Reza Pahlavi promoted the idea as contributing to the country’s growing domestic tourism industry. The project was halted at the beginning of the revolution and the onset of the Iran-Iraq War forced the government to forget about continuing with the project for many years.

Nobakht noted that from 1996 to 2015, only 17% of the Tehran-North motorway was completed due to a lack of funds and focus on the project.

He added that this “construction project has received a considerable boost during the Rouhani administration”.

The road will reduce travelling times between Tehran and the Caspian Sea by at least two hours. The new motorway will offer two lanes instead of depending on just one—an approach that is the cause of several hundred accidents annually in Iran.

Government officials have acclaimed work that has included blasting through part of the massive Alborz mountain range, but they did not mention that several Chinese contractors have been active in working on this part of the project.

According to sources close to the project, the Chinese engineering teams were instrumental in bringing in several drilling machines for this investment and several others in the past few years.

Section 4 at the Caspian Sea end is complete. Various progress reports have circulated as to Sections 2 and 3, which pass through the mountains, with some project engineers saying their full completion may not be announced for two years.

According to initial Rouhani administration estimates, another IRR20tn ($153mn at the government exchange rate) would be needed to complete Section 2 and another IRR850bn ($6.5mn) to finish Section 3.

It’s election day in Iran and the situation could hardly be more confused. Until the fatal ... more

Two Iranians with coronavirus die in holy city of Qom, a magnet for pious Shi’ite Muslims from around world

Two Iranian men infected with the new coronavirus (officially the COVID-19 virus) have "died of respiratory illness" in a hospital in the holy Shi'ite city of Qom, head of the city's University of ... more

The US Senate on February 13 passed a bill to curtail President Donald Trump's ability to wage war on Iran without congressional approval. The Iran war powers resolution was approved by a vote of ... more