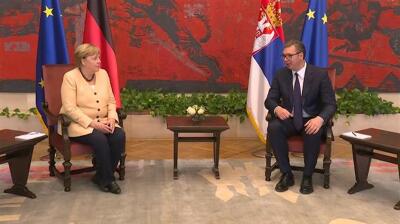 Angela Merkel, the outgoing German chancellor, said during her visit to Belgrade that there is still a long way to go before Serbia and the entire Western Balkans region finally joins the European Union, but that there is an “absolute geostrategic interest” in those countries joining the bloc.

The German chancellor visited Serbia on September 13 as part of her farewell tour of the region, meeting with President Aleksandar Vucic. During talks with Vucic, the German chancellor kept the door open to the Western Balkan countries for EU membership, but was more cautious about the timeframe.

“We who are already members of the European Union, should keep in mind that there is an absolute geostrategic interest for us in accepting these countries [of the Western Balkans] into the European Union,” said Merkel at a joint press conference with the Serbian president.

She noted that as well as concerns over backsliding on reforms, “We can see that there is also influence from many other regions of the world”. “If then the European Union does not move fast enough with the construction of roads and certain actions, then one is of course also forced to come to terms with other partners. That is why we must, from our side — I am speaking here as German Chancellor and a member of the European Union — keep reminding ourselves of how important it is, from a geostrategic point of view, to bring these countries closer to the European Union.”

Merkel called for progress towards EU membership to continue — but noted that changes need to be made. “I hope that we will soon get some momentum back in this entire process,” she emphasised at the joint press conference, according to a transcript on the German government website.

Serbia was given EU candidate status in 2009, four years after Merkel became Germany’s chancellor. She initiated the Berlin process aimed at giving fresh impetus to the enlargement process. However, despite progress towards EU accession by countries from the region, none have yet joined the bloc, and Bosnia & Herzegovina and Kosovo have yet to gain candidate status.

Commenting on Serbia’s progress, Merkel said that Vucic had promised that Serbia would make progress towards judicial reform by the end of 2021, and spoke of the need for further reforms.

“We have of course talked about the domestic political situation and the need for reform. I think that in order to open up new chapters in the enlargement process, it is very important that progress is made, particularly in the area of ​​the legal system. The president has also made plans and promises here,” said Merkel.

The biggest obstacle on Serbia’s path towards EU accession is its relationship with Kosovo, which unilaterally declared independence from Belgrade in 2008. While the two countries are engaged in a dialogue aimed at normalisation of their relations, Belgrade has been adamant that it will not recognise Kosovo as an independent state. The incompatibility of the two countries’ positions has held back progress on EU integration for both.

Commenting on the issue of whether Serbia will eventually have to recognise Kosovo, Merkel said: “Some questions are only resolved at the end of a process. Everyone knows that Kosovo is not recognised by all member states of the European Union. Let me now say it from the European perspective: this question must be resolved in order for today's members of the European Union to say yes … to the admission process. But there is certainly no point in constantly talking about the last problem until you have tackled completely different problems. I am in favour of a pragmatic approach to such questions.”

“We talked about relations with Pristina, including the dialogue with Brussels. I said that Serbia is very committed to this dialogue. Serbia believes that a frozen conflict is not a good solution and that it is rather necessary to find a compromise. We will always remain open to discussions about how to find such a compromise solution. That would be good for both Serbia and the Albanians. Only in peace do we see a future,” said Vucic on the same issue.

During the press conference, Vucic also highlighted Germany’s importance as Serbia’s biggest trade partner. “Hopefully we will reach six billion [euros] in trade with Germany this year. That is three times what it was ten years ago. So that's not a 30% increase, it's threefold. We have more than tripled our exports, again thanks to German companies. We owe Germany a big thank you for our economic development, but also the government of Chancellor Merkel for creating the prerequisites for supporting investments in the Western Balkans and for not bothering anyone that we are an investment location and that we are open to it position well in the European area,” he said.

Asked about the future after Merkel stands down, Vucic sad he is “a little afraid of what's in store for us”. “If you ask me whether I felt safer as long as Angela Merkel was active in Europe, then I will not be talking about the bush and will not say it any other way than I really think: Yes, Angela Merkel was and is one undisputed leader, leader of Europe; she was one of the rare people who could call anyone in the area at any time, and we all felt obliged and responsible … Angela Merkel is a political authority that we always wanted to hear,” said the Serbian president.

However, the opposition in Serbia put a less positive spin on Merkel's visit. Opposition representatives said that Merkel had actually said that Serbia is a long way from joining the EU, and accused Vucic of being ready to compromise on Kosovo.

Dragan Djilas, the head of the opposition Party of Freedom and Justice (SSP), said, as reported by TV N1: “German Chancellor Angela Merkel brought Aleksandar Vucic to power in Serbia, she supported him all the time. Now that she is leaving politics, it would be fair to take him with her.”

After Serbia, Merkel will visit Albania, where she will meet with leaders from countries across the region.