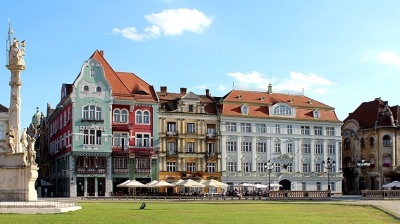 Timisoara, the fourth-biggest city in Romania, and several neighbouring communes entered lockdown for 14 days as of March 8 due to a surge in the number of new COVID-19 cases.

Timisoara is the first first-tier Romanian city to take such a decision in 2021, but the number of infections is rising elsewhere in the country as well.

Hundreds of city residents gathered in front of the city hall to protest against the decision. At the same time, supermarkets in the city were overcrowded with people doing last-minute shopping.

Locals will be able to leave their homes only for well-grounded reasons and only based on a statement. Stores will close before 20:00, and the number of customers admitted inside simultaneously must not exceed 30% of the usual capacity. All schools will close, and students will take online classes.

In separate news, the infection rate in the capital city Bucharest and three other counties (Ilfov, Cluj and Brasov) exceeded three people per thousand residents, putting them in the red zone. This means the local authorities will restrict certain economic and social activities.

Cluj-Napoca and Brasov were among the worst hit cities under the previous waves of infection.

Kindergarten and primary school pupils, as well as students in final years preparing for the national examinations, will be allowed to go to school in person, while the rest will stay home and study online.

The head of the Department for Emergency Situations, Raed Arafat, said that the country faces the risk of a faster COVID-19 spread due to the new strain that is becoming predominant everywhere.

All localities in the country are being monitored, and where local or regional quarantine measures are required, they will be taken. Otherwise, we could reach more drastic measures at the national level, according to Arafat, who assures that a new countrywide lockdown is not "on the table" at the moment.

"If the growth continues ... where local and zonal measures are needed, they will be taken. If we do not take them, we will end up taking more drastic national measures, and we are trying to avoid this. At this moment, we are not discussing a total lockdown. We try our best not to get there," Arafat said.

Kyrgyzstan hits Canadian gold mine operator with $3.1bn fine and unveils law on state takeovers of companies
7 hours ago
ECHR deals big blow to Polish government-dominated top court
18 hours ago
Germany deal to buy Sputnik V dead, but India to receive 360mn doses
18 hours ago
Lukashenko signs decree on the transfer of power in the event of his death
18 hours ago
Amnesty International restores Navalny’s Prisoner of Conscience status
1 day ago