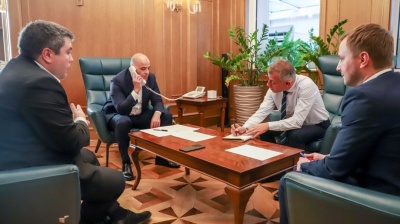 Prime Minister of North Macedonia Dimitar Kovacevski on a telephone call with French President Emmanuel Macron. / vlada.mk
By Valentina Dimitrievska in Skopje May 19, 2022

The French President Emmanuel Macron urged Bulgaria and North Macedonia on May 18 to solve their dispute which will open the EU perspective for Skopje at a time when there is a risk of destabilisation in the continent, as he held phone conversation with leaders of both countries.

Bulgaria used its veto for the first time two years ago, which also prevents Albania from starting EU accession talks, as Tirana and Skopje are coupled in the process. Pressure on Sofia to lift the veto has increased following Russia's invasion of Ukraine.

“The purpose of these talks, while France holds the EU presidency, was to encourage the two countries to quickly pursue the dialogue on the dispute between them,” the President’s office said in the statement.

Macron recalled his attachment to the EU perspective of the Western Balkans, in particular in the context of the destabilisation that the European continent is going through amid the Russian attacks on Ukraine, according to the statement.

In the meantime, Bulgarian news agency BTA reported on May 18 that Radev told Macron that Bulgaria expects specific results from North Macedonia in that respect before Sofia can lift its veto on launching the EU accession talks with Skopje.

The phone calls were held the same day as the European Parliament started a debate on the progress reports on Albania and North Macedonia, which it is set to vote on on May 19.

According to Radio Slobodna Evropa, EU Commissioner Didier Reynders, who replaced EU enlargement commissioner Oliver Varhelyi during the session of the European Parliament, called for EU negotiations with North Macedonia and Albania to begin before the end of the French presidency on June 30.