Lukashenko unleashes the Titushki as the people unmask the OMON 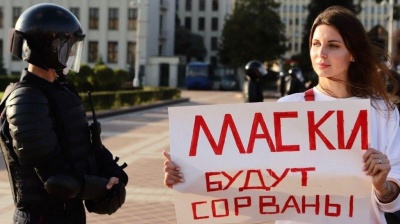 At least 100,000 Belarusians took to the streets of Minsk again on Sunday September 6 for the weekly mass demonstration against Belarus' self-appointed President Alexander Lukashenko under the slogan “all for one and one for all", but this week they faced masked plainclothes thugs known as the Titushki.

The mass rally on Sunday followed on from another female-only rally on Saturday, which was attended by at least 10,000 women and passed off without incident.

The violence in Belarus is escalating slowly. Lukashenko deployed even more police and OMON riot officers than in last week’s rally, and regular troops were also seen carrying guns. Military APCs and water cannon were also moved up to guard the presidential palace and the whole of the centre of Minsk was closed to pedestrians using barriers and barbed wire.

However, Lukashenko’s forces were largely rendered ineffective by the sheer size of the crowd that turned out in another mass demonstration at least as large as the previous two Sunday rallies.

The crowds were big in the regional cities too. In Vitebsk the OMON underestimated the number of people that would turn out and despite forming a line to block the marchers' progress the crowd was so big it simply walked passed the police lines, which were powerless to stop them.

In other cases the triple ranks of police were quickly broached by the press of the crowd, although police officers detained many of the people in the vanguard.

Demonstrators clashed with a line of police in the regional city of Grodno but eventually pushed through their ranks, although police arrested several members of the demonstration

The number of kidnappings has also increased, with the Vesna NGO reporting that 174 people were arrested by plainclothes offices leaping out of unmarked vans and dragging passers-by off the streets.

Most worrying of all is the appearance of forces wearing green uniforms but without insignia that some have speculated are the first Russian reinforcements to appear on the streets of Minsk, although there has been no confirmation of this yet. 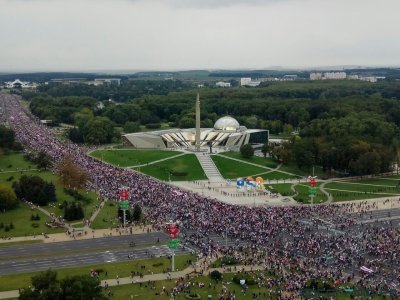 A crowd of at least 100,000 protesters turned out on September 6 to demand that Lukashenko resign

The mass rallies remain remarkably peaceful, with large groups of people gathering in the suburbs and then marching into the centre of the city in groups from multiple directions to make crowd control as hard as possible for the authorities.

Bagpipes, costumes and even a drum kit on wheels were amongst the crowd that has made the demonstrations as much a festival to celebrate Belarusian nationhood as a political rally.

However, amongst the new features of Sunday’s rally was the appearance of the first anti-Russia signs, decrying any loss of sovereignty or a potential merger between the two countries that is currently being negotiated by Lukashenko. 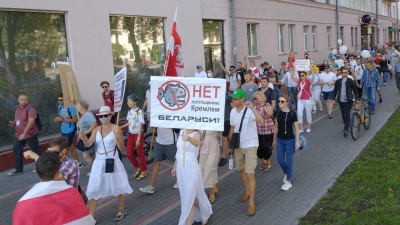 The first anti-Russia posters appear at the September 6 mass rally. The poster says: "NO to the absorption of Belarus by the Kremlin".

Until now, the opposition leaders have been very cautious to stay neutral on Russia and make it clear they see Belarus’ future as remaining in a close economic partnership with Russia.

But after Russian President Vladimir Putin’s statement that he was willing to send a special military unit to quell the protests “if necessary” on August 27 and effectively threw the Kremlin’s support behind Lukashenko things were going to change. It appears Putin is willing to sacrifice the goodwill of the average Belarusian for his goal of completing the Union State deal with Lukashenko, who is due to visit Moscow in the near future to sign off on the agreement.

Titushki is slang word for hired thugs used by the authorities to intimidate the people and they are widely used in countries across eastern Europe, especially in Ukraine.

Brawny men wearing facemasks and brandishing truncheons appeared on the streets of Minsk during the Sunday rally and began randomly attacking pedestrians and demonstrators.

In one incident, widely shared on social media, a group of titushki attacked a group of demonstrators, knocking some to the ground where they were beaten with truncheons. Another group took refuge in a café, but were followed in and beaten by the plainclothes men who smashed the glass front door – the first window to be broken in the month-long protests.

The man wearing a hat breaking a glass door to a café in Minsk is Colonel Mikalai Karpiankou, the chief of the Main Directorate for Combating Organised Crime and Corruption of the Interior Ministry, reports Hanna Liubakova, a Belarusian journalist.

The group was later identified as belonging to the anti-corruption & anti-organised crime unit of the Interior Ministry and lead by Colonel Mikalai Karpiankou, according to reports on social media. “They are used by Lukashenko to go after the opposition parties and organisations. Officially they are an elite unit with brains, and although they are officially part of the police they are highly autonomous,” said Ihar Filipau, a Belarusian commentator based in Germany.

Belarusians responded to the attack in the café with outrage and a crowdfunding page was set up which raised money to replace the broken glass door within a few hours.

A new green uniform bearing no insignia was on display on the streets of Minsk over the weekend, leading some to speculate that Russia has sent reinforcements. The Belarusian OMON wear a black uniform and regular Belarusian troops have not been used for crowd control and wear uniforms bearing insignia. These green-uniformed men were dressed in anti-riot gear similar to the OMON.

Their appearance is reminiscent of the “little green men” that appeared on the streets of the Crimea when Russia rushed through a referendum on accession that lead to the annexation of the peninsula in 2014. 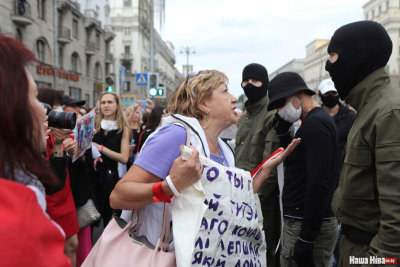 Security forces appeared on the streets of Minsk on September in a new green uniform that has no insignia.

Moreover, there were reports of a group of special Russian forces in Kaliningrad from the end of last week and social media footage of them removing their insignia from their uniformed that had already rung alarm bells.

Dmitri Pavlichenko, head of Belarusian Special Rapid Reaction Unit that is also alledged to have carried out political assassinations and the one rumored to be responsible for orders to torture in Okrestino detention centre, was spotted watching the demonstrations (far right) together with Lukashenko’s press secretary Natalya Eismont (left).

The street kidnappings continue, but ordinary citizens seem to have lost all fear and increasingly passers-by are jumping in to rescue their fellow citizens from abduction.

In one incident a

Passers-by rescue a woman on a bike from arrest

A plainclothes officer later identified as Andrey Karpov on social media tries to arrest a man who is rescued by passers-by during the protests on September 6 in Minsk.

The protesters have developed a new strategy to fight back against the terrorisation campaign of random arrests and beatings. Protesters have begun to rip the masks off OMON and plainclothes police and then posting their faces on sites, identifying the officers and documenting their abuses. 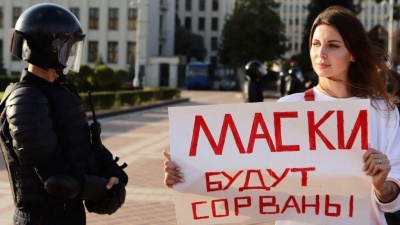 “All masks will be ripped off.”

It turns the tables on the authorities that regularly video protesters in order to identify and punish them later.

The officers that are unmasked usually disengage from the mêlée to replace their mask or retreat to the safety of their vans. Websites and Telegram channels have appeared to post the identities of the OMON officers and shame them in their own communities.

The OMON are vulnerable to this tactic, as there are only about 1,500 of them in total and so it is relatively simple to identify all of them and document at least some of their actions.

However, as ever with the Belarusian protests they have also brought a sense of humour to the fight. One young woman carried a poster saying: “OMON if you take off your mask, I will take off my top.”

Tensions have reached a 10-year high since new rules set by Pristina forced Serbian drivers to change their number plates to enter Kosovo.

Neighbouring country to Afghanistan thought to be hosting resistance leaders who may be seeking to regroup.