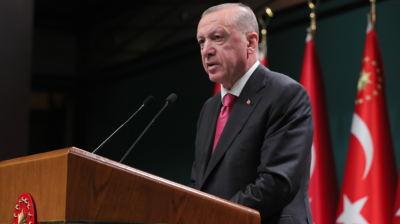 Erdogan seen after a Cabinet meeting on May 23. / Turkish Presidency.
By bne IntelIiNews May 24, 2022

The Turkish lira dragged Turkey further down the road to economic hell on May 24, breaching the 16/$ threshold as markets despaired at a populist government that won’t play ball with conventional economics.

May 26 brings Turkey’s next monetary policy committee meeting, but despite the real interest rate at minus-56% being the lowest in the world—the benchmark rate of 14% compares to official annual inflation of 70%—analysts do not expect Turkish President Recep Tayyip Erdogan, vocally committed as he is to establishing Turkish economic independence that breaks the influence of what he describes as global market manipulators, to allow a dose of monetary tightening. At the same time, Erdogan is playing hardball with the US and other Nato powers, blocking the bids of Sweden and Finland to join the defence alliance, and is cranking up tensions once more with Greece, going so far as to say on May 23 that to him the Greek prime minister no longer exists. The foreign policy aggression has further soured market sentiment on Turkey.

"At the moment, it's almost a one directional bet for the lira, but the risks of more excessive and more extreme central bank adjustments to combat it are increasing as the currency weakens," said Simon Harvey, head of FX Analysis at Monex, as cited by Reuters.

He added: "What we are not seeing is the traditional rising of interest rates. We'll see that again this week when they [the central bank] will likely hold the rate at 14%."

The lira, of course, is also caught in a broad selloff of emerging market stocks and currencies, with miserable company earnings exacerbating anxieties about global economic growth. But its descent has long been driven by Turkey-specific, or rather Erdogan-specific, factors, such as the ultra-loose monetary policy.

The central bank has spent years burning through FX reserves in vain efforts at defending the lira. It has little ammunition left, with recent weeks bringing another steep drawdown on the reserves that has rattled observers. Excluding swaps with commercial lenders and other central banks, Turkey’s net foreign assets have reached a negative $63.3bn, Goldman Sachs Group data shows.

“A deteriorating external financing position, rising inflation, further de-anchoring of inflation expectations, political divergence with the West in Nato, and the inability for the Turkish central bank to alter policy to influence macro developments mean the Turkish lira is having to depreciate to equalise the mounting economic pressures,” said Simon Harvey, head of FX analysis at Monex Europe, as quoted by Bloomberg.

With little impact on the plight of the lira made by so-called FX-protected accounts announced by the Erdogan administration at the end of last year, after the currency crashed to its all-time low of 18.37, and the country—almost entirely dependent on imports for oil and gas—bashed by high energy prices, the prospects only seem grim.

“Pressure on the lira is mounting,” Per Hammarlund, chief emerging markets strategist at SEB AB in Stockholm, told Bloomberg, pointing to “persistently high inflation, signs of slowing growth in Turkey and its main trading partners, and a disastrously misguided monetary policy”.

“The authorities will have to pull another rabbit out of the hat to stabilise the lira,” Hammarlund added. “But with reserves dwindling and the option of hiking interest rates out of the question, support for the lira will ultimately have to come from the government budget.

Separately, the cost of insuring Turkey's debt against default jumped to its highest level since the 2008 global financial crisis on May 24. IHS Markit data showed 5-year credit default swaps (CDS) spiked to 730bp from 704 points overnight.

With Turkish parliamentary and presidential elections due by June next year at the latest, the opposition will want the campaigning focus to stay on the state of the economy.

The government is ignoring the realities of the country and its people, the main opposition Republican People’s Party (CHP) leader Kemal Kilicdaroglu was on May 24 reported as saying by Hurriyet.

“I would like to call out to all my citizens, regardless of the field they work in: You see it, I see it too. Turkey is not managed well. This is an administration that does not listen to the problems of the citizens,” he said, accusing the government of being “disconnected from citizens.”

“This is the first time I have witnessed an economic policy in the history of Turkey that transfers resources from a handful of low-income groups to high-income groups in a deep economic depression,” he added.