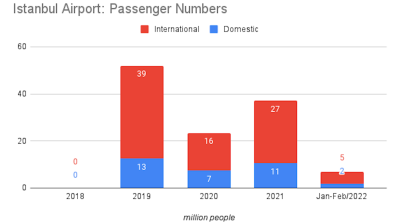 Limak Yatirim Holding and Mapa Insaat have agreed to sell their 20% stakes in IGA Havalimani Isletmeleri, the operator of Turkey's mega airport, Istanbul Airport, to the two partners remaining in the airport company, Cengiz Insaat and Kalyon Insaat, sources told Bloomberg on March 28.

Following the transaction, Kalyon’s stake will increase to 55% and Cengiz’s will move up to 45%.

In 2013, a consortium of five companies, namely Limak, Mapa, Cengiz, Kalyon and Kolin Insaat, signed the contract to build the airport under a public private partnership (PPP) deal. Each took a 20% stake.

In 2018, the airport went operational. The investment cost stood at $6.5bn.

In 2019, Kolin sold its stake to Cengiz and Kalyon. Kalyon received 15% and Cengiz 5% from Kolin.

The consortium was supposed to pay €22bn to the Turkish government in annual rental fees for the duration of the 25-year lifetime of the operator project.

In 2015, IGA obtained €4.5bn of the initial 16-year loan from the banks in question. In April 2018, unnamed people told Bloomberg that IGA was in talks with the banks to obtain an additional €1bn loan.

IGA is also the beneficiary of consecutive debt restructuring deals with the General Directorate of the State Airports Authority (DHMI).

In February 2021, the DHMI provided another grace period for IGA’s fees to 2024.

In January-February 2022, the airport served a total of 7mn passengers, including 5mn international and 2mn domestic passengers.

The consortium that built the Istanbul Airport is like the Champions League.

There are actually more than five Erdogan-affiliated contractors but Kilicdaroglu’s “Gang of five” term has become a common idiom in Turkey to refer to all such “businesspeople.”

Kilicdaroglu has recently been warning foreign creditors of Erdogan’s contractors to avoid providing loans. The opposition in Turkey has been talking about declaring the Erdogan regime debts “odious debts.”

Odious debt, or illegitimate debt, is a legal theory, in which national debt incurred by a despotic regime is said to be non-enforceable. In 2008, Ecuador managed to reduce the price of its debt letters by declaring them as odious debt.

The $78bn sum will assuredly be paid to city hospital operators in the form of rent expended by the health ministry. Some guarantees given by the government could possibly be unrealised if concerned projects earn money. However, among the completed projects, there is yet to be a self-financing project.